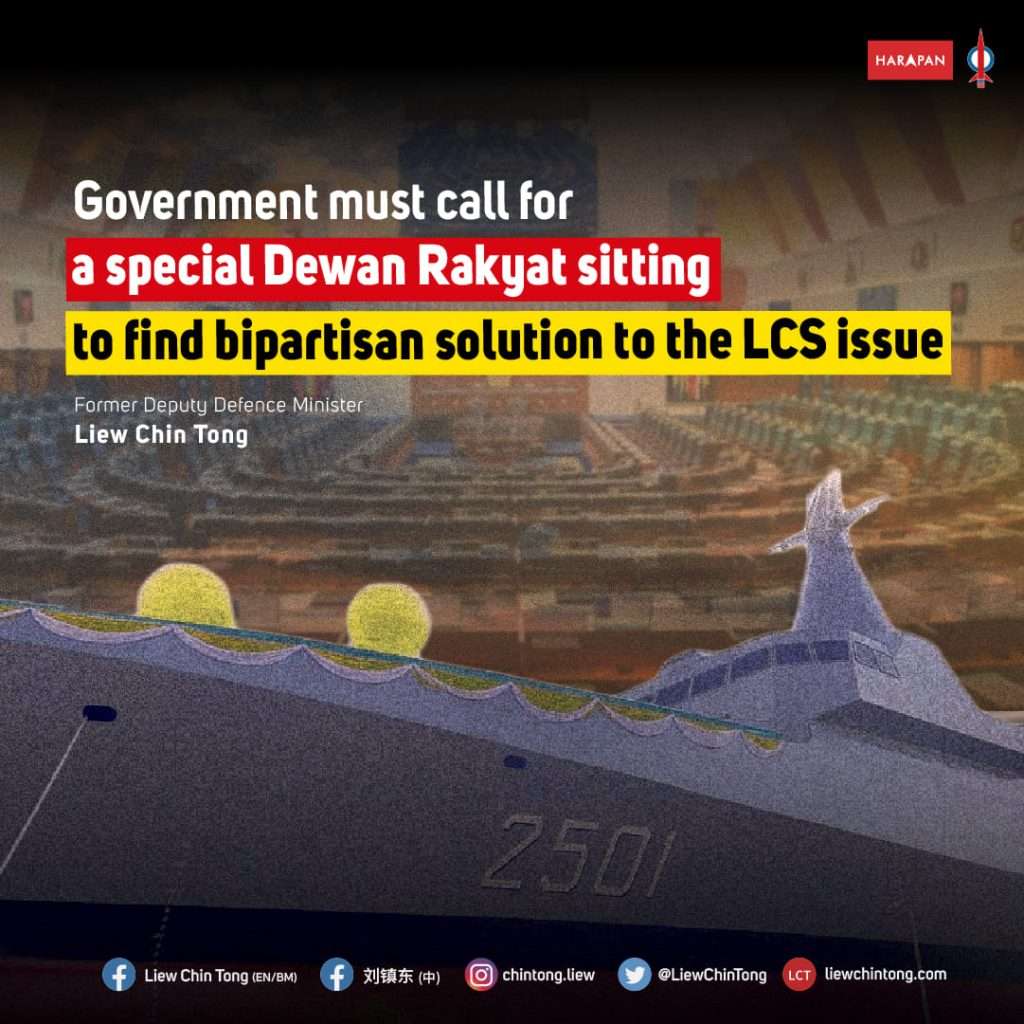 The 14th Parliament will be automatically dissolved in less than a year, by 15 July 2023, and any solution of the LCS project has to be of bipartisan nature so as to last beyond the next general election and survive changes of government.

This is necessary as defence procurements are usually a multi-year process.

For example, the NGPV was first conceived in 1990, the first year Najib became Defence Minister. The contract was officially signed in 1998, and the final ship was delivered in December 2010. It was a full 20-year cycle. The six Patrol Vessel ships were delayed for a duration of between 542 to 1332 days.

With the information made available to me, I am of the view that if we restart the LCS project now, 2026 is the earliest date the first ship (LCS1) can be delivered to the Navy.

Member of Parliament for Iskandar Puteri Sdr Lim Kit Siang said in his statement yesterday that “the procurement of LCS is critical to safeguard the country’s security and sovereignty as the Navy needs to have a combat capability in line with the development of the regional geostrategic and geopolitical security landscape.

As an end user, the delay in the project has had a negative impact not only on RMN’s combat capability but also on the morale of its personnel to carry out their responsibilities effectively.

It is important to proceed with the project so as to prioritise the country’s security and sovereignty.

The Navy and country must move on to complete and deliver the six LCS in the shortest time possible.”

I agree with Kit Siang’s view. Malaysia is geographically situated at some of the most important waters in the world – the South China Sea and the Malacca Straits. Our Navy needs the ships.

For the LCS project to move forward, the Ismail Sabri Government, which currently has a shelf life of less than 10 months, should seek bipartisan consultation and solution through a parliamentary committee, which will eventually be endorsed by the Dewan as a whole.

The Cabinet should decide on next Wednesday (17 August) to call a special sitting of Dewan Rakyat before the end of August and the Minister of Defence be instructed to work out a plan for LCS and consult with the parties in the Parliament through a parliamentary committee.

When the Dewan Rakyat sits for the special sitting on LCS in late August, MPs must debate:

2. the Ambrin Buang reports on NGPV and LCS

3. the forensic audit report on LCS by BNS, and

4. a proposed bipartisan solution to move the LCS project forward.

For the sake of the Navy and our national sovereignty, a bipartisan solution to the LCS project that will outlast the change of government in the next general election and beyond is crucial.