Hishamuddin should stop deceiving the public 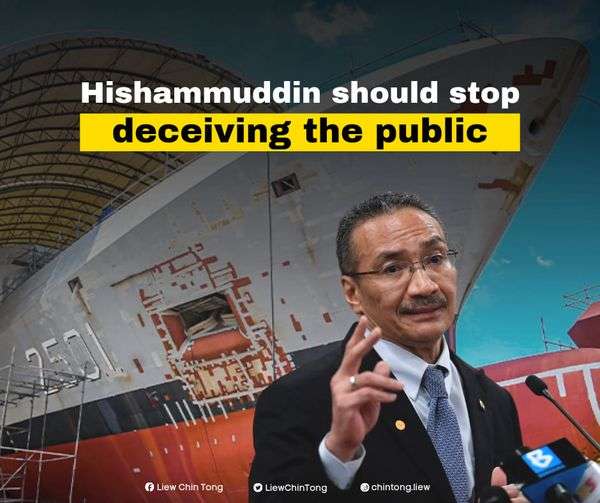 By claiming that “building the first ship doesn’t require additional allocation” and “first ship will be completed in a year or two”, Hishammuddin is putting up a smokescreen to hoodwink the public

Defence Minister Datuk Seri Hishammuddin Hussein is trying to deceive the public to buy time when he said the ongoing construction of the first littoral combat ship (LCS 1) will not involve new allocations from the government.

Hishammuddin said additional allocations for Boustead Naval Shipyard (BNS) to complete the remaining five LCS will only be considered after completion of LCS 1.

“The first ship will not involve injection of new funds,” Hishammuddin said during a press conference at Wisma Pertahanan in Kuala Lumpur yesterday.

When asked whether more funds could be channeled to BNS for the remaining ships, including the sixth which has yet to begin construction, Hishammuddin said: “Maybe. But for me, prove that we can first complete the first ship.”

It should be as clear as day that the plan Hishamuddin has in mind is not to deal with the question of additional costs until after the general election. In his mind and that of his associates, if Barisan Nasional wins big, they will be able to spend as much as they wish.

Former Minister of Defence Mohamad Sabu and I have been urging Hishammuddin to explain to Parliament and the public the financing plan on the latest attempt to “mobilise” the LCS project.

He has given no clear answer except to ask the senators at Dewan Negara to “trust him”.

Anyway, it doesn’t matter if we are looking at building one or six LCS ships, there is no way we can proceed with the project without a completed detailed design.

Building a ship as large as LCS is unlike building Lego.

According to the contract, the detailed design had to be completed by BNS and certified by Naval Group, the design authority, as well as Bureau Veritas, the independent watchdog, by November 2016. But it has never been completed.

Only upon the completion of detailed design that BNS could proceed with procuring equipment and to begin the ship building process. In a bizarre arrangement, BNS chose to put the cart before the horse. Equipment was procured and at least 15% are now obsolete.

According to Datuk Sri Muez Abd Aziz, Secretary-General of the Ministry of Defence, in his testimony to the Public Accounts Committee on 27 September 2021, after BNS completes its design works and clear its outstanding payment to Naval Group, Naval Group will require at least 12 months to complete the confirmation of detailed design.

Hence, I can attest that Hishamuddin’s talk of completing the first ship within a year is pure nonsense. The first ship will only be DELIVERED to the Navy at least a year and half to two years AFTER the detailed design is completed, which will be around 2026.

Furthermore, what did Hishammuddin mean when he said “no new allocation provided”?

It could well mean even if BNS could actually complete LCS 1, the single ship would cost RM 6.08 billion, which is the amount that had already been disbursed.

Or, is he trying to say that the government will still pay BNS the remaining RM 3.048 billion of the RM 9.128 billion total contractual value for BNS to build LCS 1?

In the end, could it mean that a single LCS ship (LCS 1) will cost RM 9 billion to build if eventually no other ships will be completed?

According to the BNS’ company filing to Suruhanjaya Syarikat Malaysia (SSM), it signed the fifth Supplementary Contract for LCS with the Ministry of Defence on 31 May 2022.

Hishammuddin must inform the Parliament and the public, as a consequence of the Supplementary Contract, whether any sum from the remaining RM 3.048 billion has been disbursed to BNS.

By now, it is quite apparent that Hishammuddin’s tactic is to buy time. He will disburse as much money out of the RM 3.048 billion to BNS, without cleaning up the past mess in BNS and without BNS having a clear financial plan ahead.

The smokescreen is “to build the first or second ship without additional cost”. And if Barisan Nasional wins the general election, they will come back with a vengeance to ask for a lot more.

This is not a sincere way of solving the long-standing problem and charting a bipartisan and sustainable path for the LCS project.