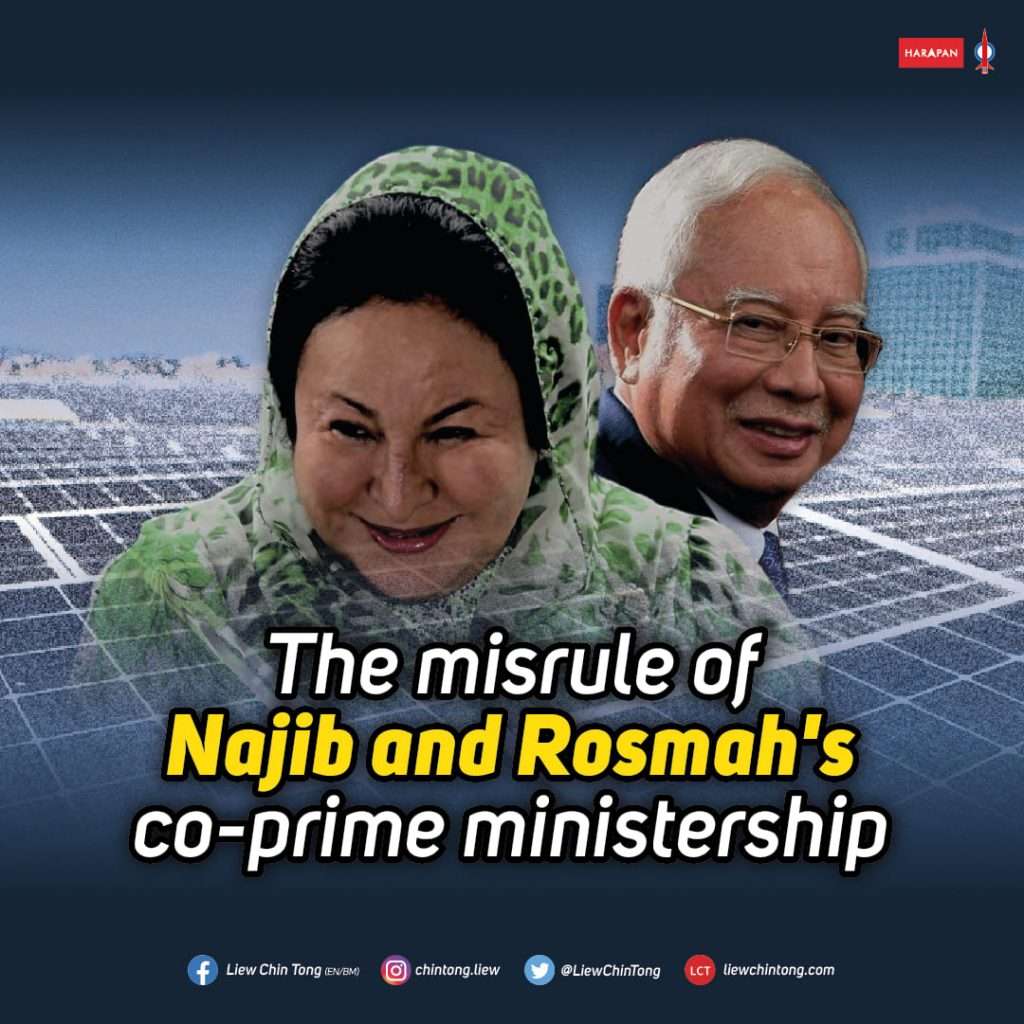 On 1 September, Datin Seri Rosmah Mansor, wife of former Prime Minister Dato’ Seri Najib Razak, was sentenced to 10 years’ imprisonment and a fine amounting to RM 970 million. Rosmah was guilty of all three charges under Section 16(a) MACC Act 2009.

I encourage all Malaysians to read the 116-page judgement by Judge Mohamad Zaini Mazlan to understand how Najib and Rosmah audaciously co-ruled Malaysia in a way that plundered the nation and caused the dismay of not just civil servants but also ministers from UMNO itself, and what we should do to prevent the repeat of such misrule.

There were 369 rural schools in Sarawak that had no connection to the public electricity grid due to their remoteness. These schools depended on generators for electricity, which were managed and operated by 30 contractors appointed by the Education Ministry of the Federal Government under the “Genset” project.

One of these thirty contractors, Jepak Holdings Sdn Bhd, got greedy. The company was originally responsible for generators in 16 schools in Daro/Mukah zone and another 12 schools in Baram II zone. But now it wanted to have the entire cake to itself. A solar project which would cost the government RM 1.25 billion over a period of five years was proposed by Jepak Holdings.

Saidi bin Abang Samsudin, Managing Director of Jepak Holdings was a personal friend of Dato’ Seri Mahdzir Khalid, who took over as Minister of Education from Tan Sri Muhyiddin Yassin who was sacked by Najib from the cabinet on 28 July 2015.

Saidi approached Mahdzir but the latter doubted Jepak Holdings’ capability to carry out the project. Mahdzir also refused to break rules and circumvent established processes, especially when the Education Ministry already had plans to connect some of those schools to the public electricity grid and the existing contracts for generators would only expire in December 2016.

Jepak Holdings and Saidi found their way around this: to enlist the help of Rosmah to get Najib to do its bidding.

Jepak Holdings offered to pay Rosmah 10 percent of the RM 1.25 billion contract value as commission. Rosmah’s greed was of the highest order. She asked for 17 percent and eventually settled at 15 percent, i.e RM 187.5 million. RM 187.5 million just for telling Najib to approve this project.

This solar project was exactly like other vendor-driven projects during the time of the Barisan Nasional government, such as the Littoral Combat Ship project in which the vendor decided everything against the actual needs of the end users, which were ignored and sacrificed. In the case of LCS, the Navy was ignored.

In the Rosmah-Jepak Holdings solar case, the following attempts to safeguard the public interest by the Education Ministry and the Treasury were trampled by Najib and Rosmah.

Mahdzir and Tan Sri Madinah Mohamad, the then Secretary-General of the Education Ministry, tried to ignore Najib’s minutes as there would be financial implications to terminate the existing contracts.

Second, in May 2016, the Education Ministry’s technical team proposed to Minister Mahdzir to get Jepak Holdings to do a pilot test in the 16 schools in Daro/Mukah zone and the 12 schools in Baram II zone which were under the company’s purview under the Genset contract.

Saidi and Jepak Holdings weren’t happy and wanted a letter of award for the entire 369 schools straightaway. Rosmah’s aide told off Mahdzir. Through her aide, Rosmah also told Madihah to look into the project.

Mahdzir told the court that this was the first occasion that Najib sent two signed minutes enforcing his will on a single project. He felt compelled to instruct his Ministry to act in accordance with the Prime Minister’s wish.

Third, the vendor continued to harass the Minister and the Secretary-General. The judgement says that “Mahdzir had the opportunity to speak to Najib sometime in June 2016. He tried to convince Najib to use an open tender for the project and not through direct negotiations with Jepak. Najib was however adamant and told Mahdzir to carry out his instructions.” (Paragraph [42]) Rosmah further instructed Mahdzir brazenly to “look into the Jepak project.”

The attempts of civil servants who wanted to safeguard the government and nation’s interest, such was the case with Dato’ Othman and Tan Sri Madinah, were futile and disregarded by the greedy Najib and Rosmah.

Sixth, on 9 November 2016, Mahdzir complained to Najib that Jepak Holding harassed him and was disrespectful towards him as a minister. Najib ignored Mahdzir’s grievance and told the latter to execute his order.

Seventh, on 10 November 2016, a letter of award of RM 1.25 billion was given to Jepak Holdings with a condition that the Ministry reserved the right to terminate the contract or to reduce the number of schools involved once they were connected to the public electricity grid. Once again, Rosmah got her aide to harass and told Mahdzir off. The latter relented and removed the clause.

Eighth, in July 2017, Saidi complained to Mahdzir that the finance department of the Education Ministry had withheld payment due to incomplete documentation. Mahdzir told Saidi to follow procedures. “Saidi was not amused and belittled Mahdzir. He told Mahdzir that he would complain to Najib, Rizal (Mansor, Rosmah’s aide) and the accused (Rosmah).” (Paragraph [69])

At every turn, ministers and civil servants were trampled by Najib and Rosmah. To put it simply, every time there was a setback for Saidi and Jepak Holdings, Rosmah would come to their rescue by instructing her husband to enforce their will.

As Judge Zaini said in the judgement, “it is indeed amazing that a contract worth RM 1.25 billion could simply be awarded by penning minutes without going through the expected procedures that will serve to check and balance.” (Paragraph [235])

The judge had effectively alluded to Rosmah being the co-Prime Minister by pointing out that she asserted huge influence on Najib. “I say this with the greatest of respect, but it is apparent that the accused (Rosmah) dominates Najib. She has control over him. She had no business interfering in Najib’s duties or the government’s affairs, but she did.” (Paragraph [237])

Rizal Mansor, according to the judgement, claimed that the accused (Rosmah) influenced the government agencies and the civil servants, who would often accede to her demands. The civil servants would do their utmost to please her. Rizal claimed that civil servants feared her as she was fierce and could influence Najib to transfer them or simply put them in ‘cold storage’ should they dare to oppose or disobey her instructions.” (Paragraph [78])

Both Najib and Rosmah acted with impunity with the notion that they would be in power forever and would not have to answer for their crimes. The dates of the Rosmah-Solar case indicated that these incidents took place at the height of the 1MDB crisis and yet they were not afraid to continue taking bribes and break the law. It is truly shocking how brazen and arrogant the Najib-Rosmah duo can be.

Unfortunately, the solar project scandal is most likely to be just the tip of the iceberg in Rosmah’s money frenzy.

11,991 items of jewellery, 401 watch straps and 16 watch accessories, 234 pairs of spectacles, and 306 handbags as well as cash in various denominations amounting to more than RM 100 million were confiscated in 2019. It would have taken more than this single solar project for her to afford all these luxuries.

Essentially, the one-party state with an imperial prime minister with unfettered powers allowed Najib and Rosmah to act the way they did. The Prime Minister was given immense discretionary powers in which the check and balance mechanism was also corroded by Najib who took on the Finance Minister post, a practice that started in the late 1990s after the sacking of Anwar Ibrahim.

Time and again, we have seen that in Malaysia, an extreme form of centralisation of powers serves to benefit only the cronies. Projects for the benefit of our society such as electricity supply for schools could be more effectively dealt with by the state governments. I have been pushing for the decentralisation of powers including in education as the state governments may be in a better position to assess the needs of the people and we should not be waiting for the federal government to dictate it all.

In the name of the underprivileged school kids in Sarawak, Rosmah and Najib used the solar project to feed their insatiable greed. What they did was a heinous crime of denying these children a chance to receive education and thus a chance to have a better future.

The education sector as a whole also suffered as ministry funds were diverted to a paper project when the money could have gone into better uses.

The Malaysian government must overhaul its procurement processes to eliminate vendor-driven projects, whether for war ships or solar panels for geographically remote schools. Systems and mechanisms must be put in place to tackle corruption especially in these big ticket projects, as Judge Mohamad Zaini Mazlan puts it, “corruption has reached almost every level of society. It must be curtailed before it becomes pandemic. If corruption is left unbridled, our society will come to accept it as a way of life or business”. (Paragraph [248])

The 2018 general election ended the imperial prime ministerial power, and with the jailing of Najib and the latest conviction of Rosmah, wrongdoers were finally brought to justice. The old order has crumbled and a more democratic political order with sufficient checks and balances would have to be built in its place.