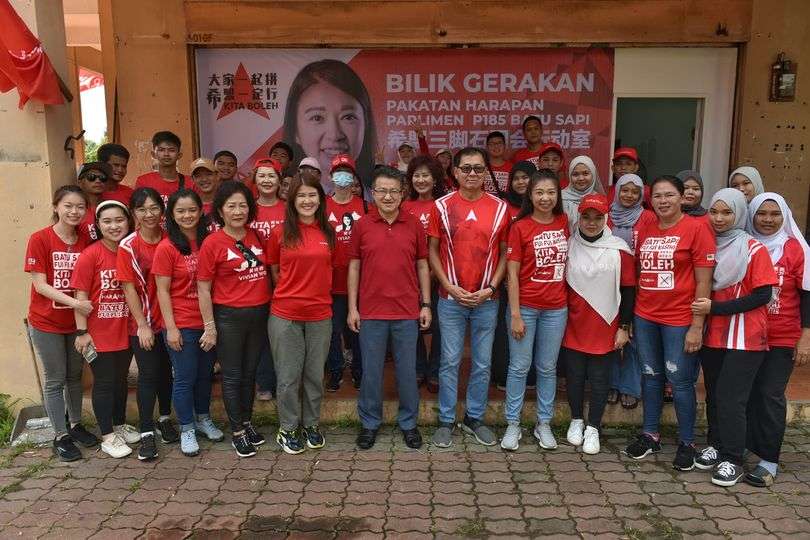 The cluster of seats in the city of Sandakan is very important for the DAP and Pakatan Harapan nationally. Every seat counts in the race to 112 seats to gain a simple parliamentary majority.

We are 12 days away from polling day. A total of 21.17 million Malaysian voters will decide the fate and future of Malaysia, not just for the next five years, but for the next generation.

This is not about candidates or parties only. This general election is about choosing the next government from three major coalitions, namely Pakatan Harapan (PH), Barisan Nasional (BN), and Perikatan Nasional (PN).

In Sabah, things are a little more complex. Sabahans are more experienced than most Malaysians in terms of politics and elections. Parties and leaders come and go, Sabahans know better.

Sabah BN and Gabungan Rakyat Sabah (GRS), rivals in the September 2020 Sabah state election, are working together. Much as GRS is supposedly the ally of Parti Pribumi Bersatu Malaysia (Bersatu) in Sabah, it seems that the leaders do not have confidence that Tan Sri Muhyiddin Yassin’s PN would have sufficient number of seats to form the Federal Government.

GRS and Sabah BN are working together with the intention of providing their numbers to a BN Federal Government led by UMNO President Dato’ Seri Ahmad Zahid Hamidi.

This means a vote for GRS and Sabah BN is a vote for a Zahid-led UMNO Federal Government. In the Peninsula, there is a groundswell against the Zahid-led UMNO. The better choice for Sabahans is to choose Pakatan Harapan.

Warisan cannot pretend that they had nothing to do with the Pakatan Harapan government of 2018-2020. It had its share of responsibilities. To say otherwise is a blatant lie.

Thanks to the MoU, the Parliament amended the Federal Constitution to acknowledge that Sabah and Sarawak are “regions” and not merely “states” in December 2021. The MoU also yielded the passing of anti-hopping law, which is crucial to help restore faith in our political system and to prevent future Sheraton coups. Does Warisan oppose these good measures?

In Sabah, Warisan asked voters to reject “Malaya’s” parties, yet Warisan is contesting in 26 seats in the Peninsula, as well as putting up candidates against PH in Sabah this election. One wonders who is actually allies or enemies of Warisan.

The party claims that it will be a “king maker” post-election. But it looks like Warisan wants to reduce PH’s chances of forming the next Federal Government. If that’s the case, Warisan would provide the numbers for a BN government with Zahid as the Prime Minister.

Is Warisan hiding something from Sabah voters? It claims to be a local party but there is something else behind this claim.

It is public knowledge that I was close to Warisan President Datuk Seri Shafie Apdal. On 25 June 2020 at the Sabah House in Kuala Lumpur, there was a discussion about the possibility of Shafie becoming the Prime Minister. I was present. When he wanted to become Malaysia’s Prime Minister, he did not want people to know that his party was a local Sabah party. The last time Shafie attempted to become Prime Minister was when Tan Sri Muhyiddin Yassin stepped down in August 2021.

During the Sabah State Election in September 2020, his tagline was “In God We Trust, Unite We Must”. Shafie presented himself to both the national and Sabah audience that he was Malaysia’s Barack Obama, that he was an outsider to end Malaysia’s racial politics, that he was the unity candidate for all Malaysians as the next Prime Minister.

At his party’s congress in December 2020, Warisan amended its constitution to reposition itself as a national party. He did not say that Parti Warisan was a local Sabah party.

In the Johor State Election of March 2022 and in this general election, Warisan fielded candidates in the Peninsula. What happened to Warisan as the Sabah party?

In short, Shafie is not being consistent. He is hypocritical and his party is a confused lot. The idea that Parti Warisan is a local party whereas all other parties are enemies of the Sabah people is divisive and just to fish votes.

I value my past friendship with Shafie but I am sad that he isn’t consistent with his unity message.

Pakatan Harapan is the coalition of choice for all Malaysians. We do not divide people along race, religion, gender or regional allegiances. May I humbly urge all Sabah voters who believe in the spirit of “In God We Trust, Unite We Must” to vote for Pakatan Harapan.