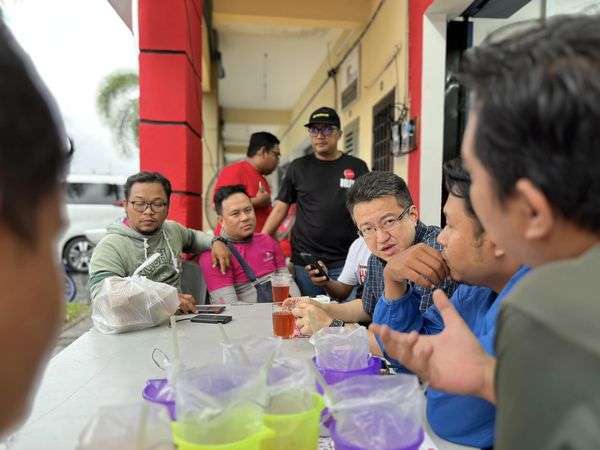 Did you know that while some p-hailing service or food delivery motorcycle riders are habitual red-light breakers, many of them are actually forced to do it because they have to avoid being classified as “late” by their employers’ rigid system?

Things are made worse when traffic on our roads has become a lot more congested and riskier for the riders. Many deaths and injuries are reported in recent months.

I met with a group of riders in Iskandar Puteri, Johor Bahru, who had asked me to share their plights with all Malaysians, and also to demand answers from caretaker Transport Minister Datuk Seri Dr Wee Ka Siong on his plans for the riders, the most precarious group of workers in our economy.

I met the riders during a downpour, and when I was listening to them, one of the riders begged to leave because he had to take an order despite the heavy rain. He said he needed the income, no matter how meagre, to feed the family. It pained me to hear it.

All but one of the 10 riders I met worked in Singapore before Covid-19 pandemic. The wages they earned during those years working in Singapore were relatively high when exchanged into ringgit.

Admittedly, they have relatively high maintenance compared to their peers working in Malaysia. Some of them own houses, which are now suffering from increasing interest rates. The rising costs of living are hurting them.

They returned to Malaysia during the pandemic. During our lockdowns, roads were safer as less cars travelled on it, and their incomes were good because many depended on food delivery service.

As Malaysia returns to full normalcy, their incomes dwindled in part because people began to eat out. At the same time, the gig economy companies wielded unfettered powers to set rules in maximising their profits while minimising riders’ pay-outs.

The riders are angry with the rising prices that do not go up in tandem with wages. Most of them can’t work a 9-to-5 job for an employer because the pay in Johor Bahru and across the nation is just too low to sustain the livelihood of their families. A few have full-time job but have to ride to supplement family incomes due to high costs of living.

When they compared the rates for riders in Singapore as well as steps taken by the Singapore government for the counterparts in the republic, they are upset that the Malaysian government is not doing much for them.

They singled out Wee Ka Siong as the poster boy for Barisan Nasional’s failure to help them. The riders learned about the minister’s arrogance when they came in a large group to a memorandum to the government about their plights on 17 July 2020. However, nothing happened.

Only when the riders took to the streets on 5 August 2022, Wee called their representatives for a discussion.

Instead of an amicable solution, the riders felt that the minister on 10 August 2022 wanted to put further burden on them. Among other things, Wee wanted to introduce a p-hailing licence as well as a register for p-hailing riders. He also planned to have short induction courses for riders and insurance protection for them.

Listening to the riders of their current lives pained me, yet it was also inspirational. These are Malaysians who work very hard to provide food on the table and shelter for their families.

They have aspirations for themselves and their children. They want a better government to give them a helping hand to achieve more.

During our discussion, the riders sked me what would I do if Pakatan Harapan came into power.

As I have proposed before, the bigger picture will be the need to fix our economy to create a skill-based economy so that skilled workers are better paid, and not everyone needs to work in Singapore or work in this precarious gig sector with very little security, in every sense of the word.

I also told them that the Pakatan Harapan government should give a voice to the riders by trying its best to balance the powers of the gig companies. There must be some regulations of pay-outs to protect the riders’ interests while making the gig companies friendlier and more compassionate towards to their workers.

We know that if Barisan Nasional were to form the next government, its Prime Minister would be Datuk Seri Ahmad Zahid Hamidi, and Wee will continue to head the Transport Ministry. The riders know what to expect from Wee.

This is the time for all p-hailing riders across the nation to make a stand – to help Pakatan Harapan defeat Wee Ka Siong in his Ayer Hitam parliamentary constituency.

We also know that anyone who becomes the next Transport Minister in the Pakatan Harapan government would be miles better and more caring than the MCA President.

I hope that when Pakatan Harapan is given the mandate to govern, we must keep our promises and do well for these ordinary Malaysians to restore their faiths in the nation, in politics, and in the leaders.

Malaysia needs a more humane economy with a government that cares.