The Strange Case of Muhyiddin Yassin (Part I) 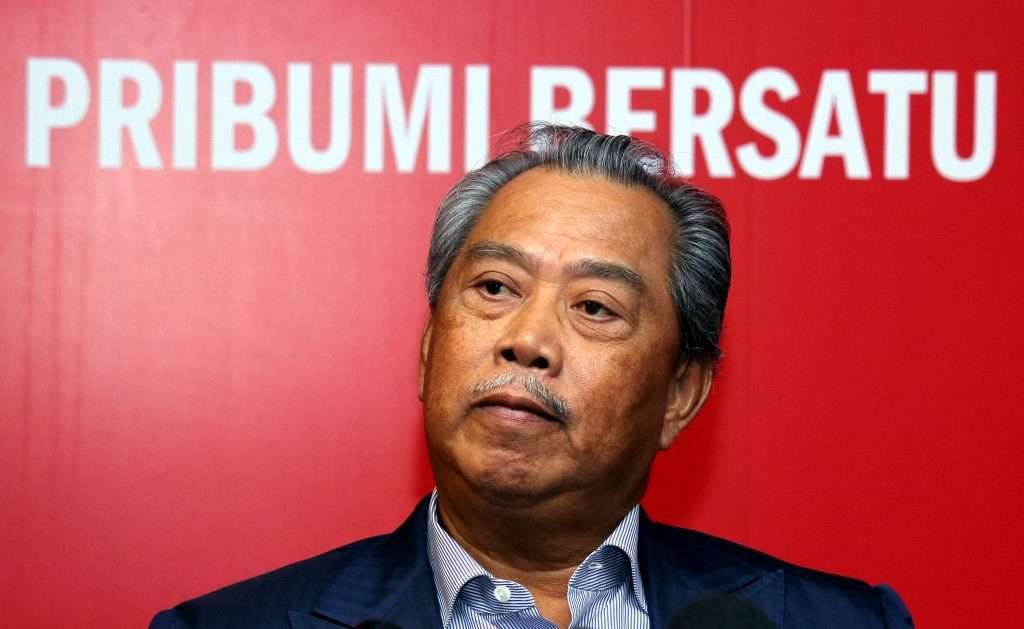 In the text messages Tan Sri Muhyiddin Yassin sent me in the past four years, he would always preface it with “Bro”. As I am younger than some of his children, I always courteously address him as “Tan Sri.”

My personal story of this mild-mannered man reminds me of the story of Dr Jekyll and Mr Hyde. It was really a strange tale but yet perhaps it’s all human nature when one is faced with the temptation of power.

We first met on 11 April 2016 when Anthony Loke and I, both of us representing the DAP, had our long introductory chat with him for slightly more than two hours.

Muhyiddin who was sacked as Deputy Prime Minister on 28 July 2015 for questioning Najib Razak’s involvement with the 1MDB scandal, has been monitored and followed by Special Branch. Not wanting to attract attention, his aide rented a hotel room in Petaling Jaya. Anthony and I went in first followed by Muhyiddin 10 minutes later. When the meeting ended, he left first. We left 10 minutes later.

On 25 July 2016, Muhyiddin met with Kit Siang, also at a hotel, in Kuala Lumpur. We went through the same process. We went in first, then Muhyiddin came in.

Today, I sincerely hope Muhyiddin would not use the Special Branch to monitor Pakatan Harapan leaders the way they preyed on him when he was out of power.

To put things in context, first, Muhyiddin and Mukhriz Mahathir were expelled from UMNO on 24 June 2016. Second, Tun Dr. Mahathir Mohamad held two strategy meetings involving all opposition leaders and some civil society leaders on 28 June 2016 and 14 July 2016 to pave the way for the formation of a new party.

In that meeting with Kit Siang, Muhyiddin told us his new party would contest 15 parliamentary seats, whereas in our communication with Dr Mahathir’s side, we were told Tun was looking at contesting 40 seats.

After the meeting, Kit Siang’s view was that Dr Mahathir’s figure was more realistic (eventually Bersatu contested 51 seats) as one wouldn’t form a national party just to contest 15 seats.

Muhyiddin was less ambitious at that time because he thought his party would still have to work with PAS whereas Dr Mahathir had discounted the Islamist party which he saw as nothing but Najib’s collaborator.

In the meeting, Muhyiddin also asked Kit Siang to assist his new party to fight Najib together, and the DAP veteran pledged his full support.

On 13 December 2016, Muhyiddin led the new leadership of Parti Pribumi Bersatu Malaysia or Bersatu to PKR’s headquarters in Petaling Jaya to sign a Memorandum of Understanding (MOU) with Pakatan Harapan.

It was the first official attempt to align Bersatu with Pakatan although at that point of time Muhyiddin was still thinking of forming a “Barisan Rakyat” as a new platform to work with both PAS and the Pakatan Harapan parties.

Mahathir however was clearer much earlier. On 12 November 2016, in his speech to Pakatan Harapan Convention, the former Prime Minister was already talking about Bersatu joining Pakatan. Mahathir was way ahead of time while Muhyiddin and Mukhriz finally gave up on PAS in February 2017.

Who will be PM

After the MOU ceremony, in a private office at the PKR HQ, an important NGO leader openly said in front of Muhyiddin and PKR President Datuk Seri Wan Azizah Ismail that she was not suited to be Prime Minister. Instead the person proposed Muhyiddin as PM and PKR Deputy President Azmin Ali as his deputy. The meeting did not end well.

That same NGO person met me for lunch in April 2015 to persuade me that Azmin should be Pakatan’s PM candidate. It was just two months after Datuk Seri Anwar Ibrahim was sent to jail on 10 February 2015.

On 9 and 10 January 2017, Sinchew newspaper published a two-part exclusive interview with Muhyiddin with an agenda to sow distrust among Chinese voters towards Bersatu leaders. Sinchew headlined Muhyiddin’s reservation about the Unified Examination Certificate (UEC) which resulted in some of his Chinese friends not being happy with him.

Muhyiddin and I got in touch. He invited me for breakfast at his favourite restaurant near his house on 24 January 2017. This was the first of my many one-on-one meetings with him.

We chatted for 3 hours. He told me he wanted to understand DAP more, “since we now have to work together”. Inevitably, one of the topics was on the position of Prime Minister.

At Muhyiddin’s request, Kit Siang met him on 7 February 2017. He requested DAP’s support for his candidature as Prime Minister. Kit Siang explained to him that the matter needed to be discussed with Anwar as DAP’s then default position was to support Anwar as PM.

For the next couple of months, the idea of Muhyiddin-Azmin pair was still being promoted even after Pakatan formally accepted Bersatu as a component party. It held the first Majlis Presiden meeting with the presence of Bersatu leaders on 27 March 2017 at 14th Floor, Parliament House.

By April 2017, the idea of a Mahathir premiership was discussed in some private meetings. However, Mahathir being PM again didn’t bode well with Anwar’s inner circle. Even Muhyiddin’s camp initially resisted the idea, but gradually Mahathir’s popularity on the ground became obvious.

Not long after, Muhyiddin decided to support Mahathir as Bersatu’s PM candidate. I respect him for looking at the bigger picture and cast aside his personal ambition. It was honourable of him.

It took months for Pakatan to decide on Mahathir as chairman. The deal almost collapsed, saved only by Nurul Izzah Anwar’s visit to the Mahathir family in London during Hari Raya.

Azmin’s faction walked out, furious that the deal was reached as a Mahathir-Anwar pact would effectively postpone Azmin’s route to become PM. Muhyiddin however was wholeheartedly supportive of the realignment, and refuse to entertain Azmin’s tantrums.

The matter didn’t end there. The insatiable Azmin was still pushing for the Muhyiddin-Azmin as PM-DPM but Muhyiddin was not involved.

There were very heated arguments with Azmin and his associates at the Pakatan retreat on 1 and 2 December 2017 in Putrajaya. Of the four parties (Amanah, Bersatu, DAP and PKR), three-and-a-half party agreed to announcing Dr Mahathir as the 7th PM and Anwar as the 8th PM, with the voracious Azmin’s faction objecting vehemently.

Negotiators from all parties raced against time to complete negotiations on 6 January 2018 for the announcement of Mahathir’s and Anwar’s PM candidatures, as well as Wan Azizah’s candidature as Deputy Prime Minister, at the Pakatan convention on 7 January 2018.

Again, Muhyiddin proved that he was a gentleman by supporting the deal while Azmin’s associates continued to protest at the convention.

Besides the top post, the convention also announced the deal for seat negotiation for Parliamentary seats in Peninsula, a first in history.

Muhyiddin, Amanah’s Sallahuddin Ayub, PKR’s Nurul Izzah, DAP’s Anthony Loke and the Johor Pakatan leaders settled the seat negotiation for Johor on 18 January 2018, the first state to do so.

Muhyiddin asked Anthony and me to get DAP to agree to stick to contesting 14 seats in the interest of the coalition, to which we complied. Originally DAP wanted to contest in 16 Johor state seats, by then still a BN stronghold. From then on, Johor was the frontline state that propelled Pakatan to national victory, winning 18 parliamentary seats (more than tripled the 5 seats in 2013) and 36 state seats (doubling the 18 seats in the past election).

As Johor DAP chairman, I worked very closely with Muhyiddin. He decided to stay put in Pagoh and not to move to a “safer seat”, a great confident booster for Pakatan supporters. In GE14, the choices of seats by Muhyiddin, Mukhriz and Mahathir sent a strong message to all voters that they were going for broke.

Muhyiddin’s aides and I looked at the numbers and we were confident of Muhyiddin’s victory in Pagoh. The constituency has 64% Malay voters and 36% others. I chose the toughest Parliamentary seat Ayer Hitam to make the point that it was a “do-or-die” battle. We were confident that Muhyiddin would win with a high non-Malay support and 40 over percent Malay votes. In the end he polled 55.21% of votes, a decent victory for Pakatan in a semi-rural constituency.

On election night, I travelled from Yong Peng in Johor to arrive at Sheraton Hotel in Petaling Jaya past midnight. Muhyiddin comforted me for my loss in Ayer Hitam. On that historic night, I could feel the warmth of his sincerity.

NEXT: PART 2 and the final part of The Strange Case of Muhyiddin Yassin