Did DAP really ‘benefit’ from the EC’s re-delineation exercise? 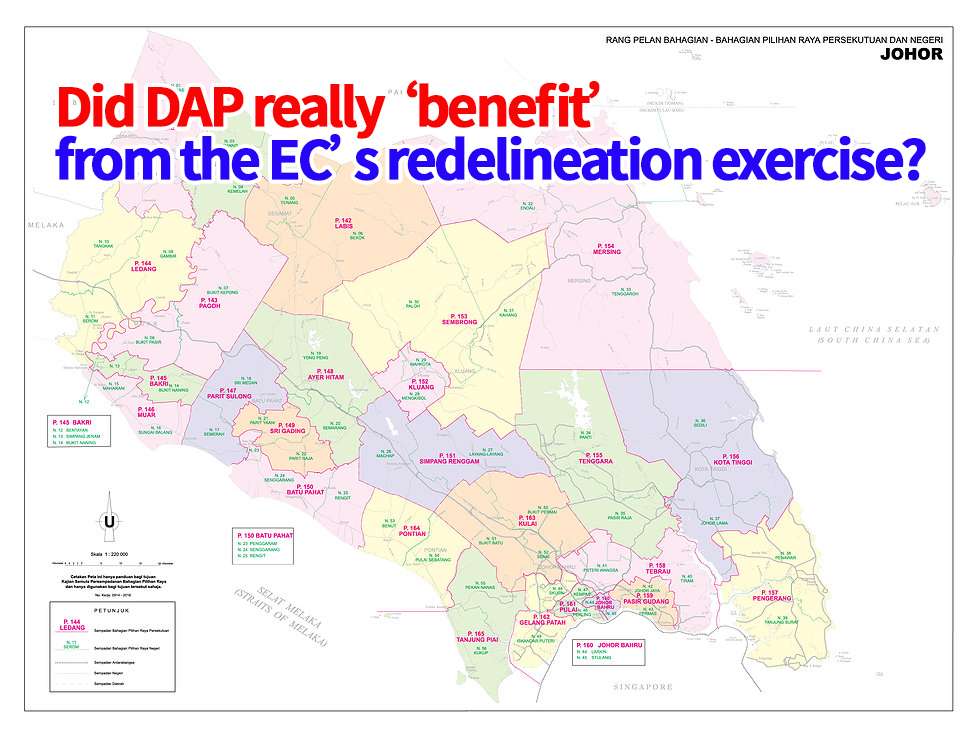 Gerakan President Mah Siew Keong has made one of the most outlandish statements of our time that the DAP ‘benefited’ from the lastest Election Commission re-delineation exercise.

At the same time, MCA President Liow Tiong Lai is also making a similar case to paint MCA as the victim of the re-delineation exercise and tried very hard to imply that MCA’s supposed losses in the exercise are DAP’s gains.

There are even media opinion pieces in the Chinese media implying that, through the re-delineation exercise, UMNO intends to favour DAP at the expense of MCA and Gerakan.

Such statements are malicious falsehoods and nothing could be further from the truth.

The truth is that UMNO is in trouble and it is worried about whether it can continue to hold on to power. The sole purpose of the 2016 re-delineation exercise is to help UMNO win by default, with or without MCA and Gerakan, as these parties have been dependent on UMNO votes to win seats.

The case of Johor clearly explains the situation.

If the Re-delineation Exercise is approved without amendments, and assuming that previous voting trends persist in the next GE, DAP will lose two state seats, i.e. Perling (proposed new name for N46 Pengkalan Rinting) and N55 Pekan Nanas.

In addition, DAP could potentially lose another 3 seats to BN, i.e. Johor Jaya, Tangkak and Bekok. It is projected that the DAP’s majority vote in these 3 seats will be reduced to less than 5%, a razor thin margin that puts these seats in danger.

Note that Bekok, while seemingly not impacted in this re-delineation exercise, was already severely affected by the so-called boundary correction exercise that SPR conducted in April 2016 which has caused 1,100 voters to be shifted out from the Bekok polling district. Based on our estimates, 70% of these voters voted against BN in the last GE.

Pakatan Harapan has five Parliamentary seats in Johor, four held by DAP (Kulai, Kluang, Gelang Patah and Bakri) and another held by PKR (Batu Pahat). The re-delineation exercise may bring mild positive effects to DAP’s electoral chances in Bakri, Kluang and Gelang Patah but will negatively impact Kulai and Batu Pahat. The electoral outcome of these seats would be mixed.

It’s crucial to understand why in places like Gelang Patah and Bakri, it would appear as though the EC is doing DAP a great favour.  The reason is to save UMNO’s marginal seats.  For Gelang Patah, several polling districts that Nur Jazlan (Pulai MP, adjacent seat) did poorly in 2013 are proposed to be transferred to Gelang Patah.  For Bakri, a large polling district with 2,000 votes (BN polled only 20% in 2013) under the Muar parliamentary seat, is to be transferred to Bakri.  Muar is a marginal seat that the opposition has a fair chance to capture in the next general election.

Our allies in Pakatan Harapan are severely impacted by the re-delineation.  Bukit Batu is the only PKR state seat in Johor. Its 4,015 or 14% healthy margin will be reduced to just 1,000 voters (3.7%) after the exercise, making it within reach of BN.  To achieve this, the Election Commission (EC) has proposed the unthinkable and illogical move to include polling districts like Taman Teratai and Ulu Choh, which are located almost 50km away from the Bukit Batu town centre and administered by a different local authority (Bukit Batu is under Majlis Perbandaran Kulai, Taman Teratai and Ulu Choh under Majlis Perbandaran Johor Bahru Tengah).


Parit Yaani, the seat held by incumbent Haji Aminolhuda, the Parti Amanah Negara Johor chief, is also in grave danger.  A large polling district with almost 2,000 voters is to be reassigned to neighboring DUN Parit Raja (a safe seat for BN) and that will cause the 1,200 majority to be reduced to about 400.

How would DAP ‘benefit’ from this Re-delineation Exercise when we are at great risk of losing 5 out of 13 incumbent seats (40% decrease) unless there is a Malay swing in our favour?

How would DAP ‘benefit’ from this re-delineation Exercise when our allies are facing the danger of losing seats in Johor which we have a chance to form a coalition government?

Most importantly, how would DAP ‘benefit’ from this re-delineation Exercise when voters nationwide, including those in Johor, have to put up with greater inconvenience, injustices and outright lies as their sacred votes are manipulated to entrench BN rule in Johor / Malaysia?

It seems very clear that BN has a set of clear objectives they want to achieve by redrawing the electoral boundaries in different states.  In Selangor, it is to snatch back the state from Opposition.  In Perak and Negeri Sembilan, it is to consolidate power, and attempt to achieve two-thirds majority.  In Johor, it is to weaken the Opposition, keeping us from crossing the 18 seats line (number needed to deny two-thirds majority).