Road accidents: Can Liow Tiong Lai and SPAD buck up? 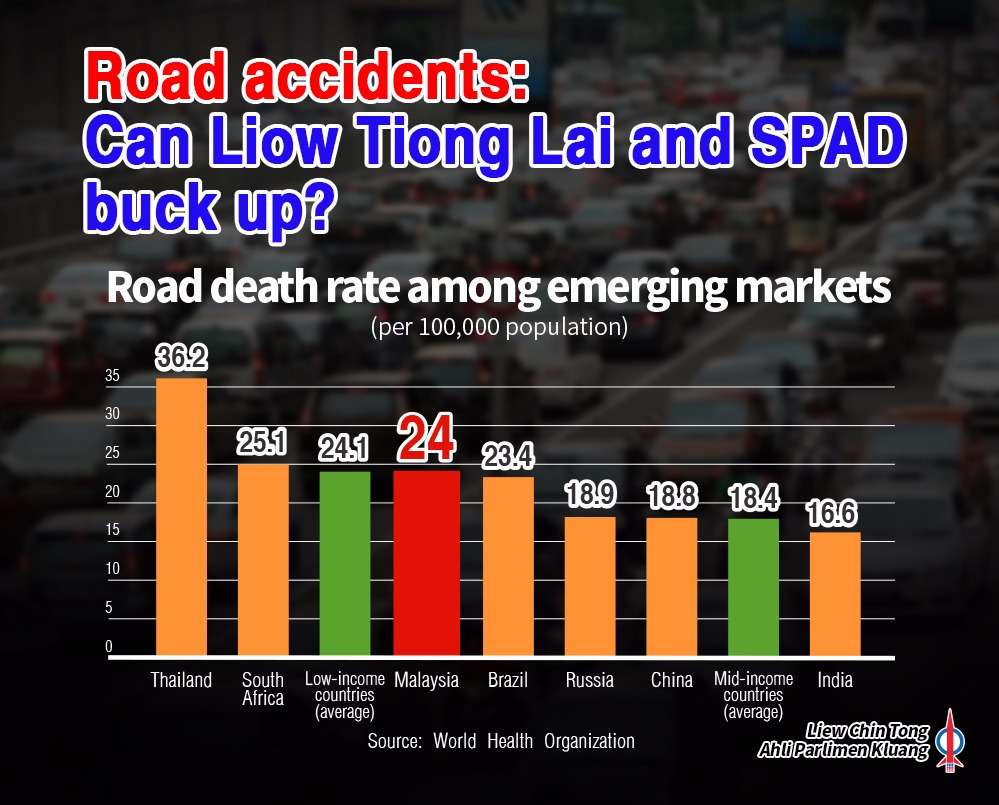 Yesterday, Bloomberg reported that Malaysia has the third highest road death rate among emerging markets, with 24 deaths per 100,000 population (per annum) according to the World Health Organisation. It is worth mentioning that according to the report, the average road death rate is 9.3, 18.4 and 24.1 deaths for developed, middle-income and low-income countries respectively.

Unfortunately, we have become numb to such statistics. Usually, when the road death figures are announced, Ministers or Ministry heads will start to talk about “Ops Sikap”-type campaigns and wax lyrical about road safety, as if the only party to blame for road accidents were the road users.

I disagree. Road deaths are due to policy failure, in particular the failure to present a comprehensive and reliable public transportation system.

Road deaths, especially among motorcyclists, is an issue which is very close to my heart. I have been speaking on the subject since becoming MP nearly a decade ago. It should be a major political and policy issue but sadly, it is not.

Transport Minister Liow Tiong Lai announced last year that road accidents had cost the nation RM9.2 billion in terms of medical cost, productivity loss and other payouts in 2016. Behind that figure is great human cost and suffering, which I have witnessed first hand.

Liow, the Land Public Transport Commission (SPAD) and the entire government should be taken to task for not doing much in drastically changing the way we commute and thus reducing the number of road deaths and related losses.

Each year nearly 7000 Malaysians die on the road, two thirds of them are motorcyclists. Many of the deaths are avoidable if we have an affordable, accessible and effective public transport system nationwide.

Malaysia’s road death rate is in the range of low-income countries despite the economy being a middle income one. (See attached graph from the Bloomberg story) 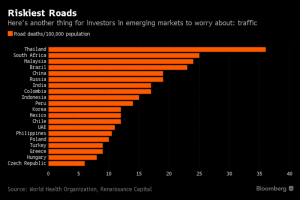 The government is only interested in building “big toys” infrastructure in Kuala Lumpur such as LRT extensions and MRT which cost tens of billions of ringgit but with limited successes in effecting modal shift from the usage of private vehicles to public transport.

The recent and costly LRT Extension Project has added 24 new stations and 35km of new tracks, but for all the billions spent, ridership did not show significant increase. In fact, Pemandu’s Annual Report released earlier this month showed that daily public transport ridership in Greater KL during morning peak hours actually reduced from 447,195 (2015) to 435,439 in 2016. 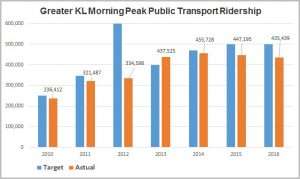 Fundamentally, the “big toys” infrastructure without a strong feeder bus service means nothing as commuters would find it cheaper and easier to commute via motorcycles.

Government more interested to spend on “big toys” infrastructure than improving the bus system, which will benefit more people

The most effective way to promote the usage of public transport nationwide is not to wait for the government to have money to build “big toys” infrastructure in towns and cities outside Kuala Lumpur but to deploy massive numbers of buses nationally to make bus-based public transport affordable, accessible and effective.

In Malaysia, there is a correlation between the number of car drivers, motorcyclists and public transport users. Generally, those who do not wish to commute by cars due to economic reasons will choose either motorcycles or public transport. Especially under the current economic difficulties for the low and middle income groups, where petrol prices are volatile and disposable income has not improved, many have given up the choice to commute by cars or had no choice but to commute by motorcycles.

This contributes to the fact that motorcyclists account for two thirds of road deaths in Malaysia. If we look at the increasing number of motorcyclists involved in road accidents, we know that the plan to combat road accidents via public transportation has not taken off.

To begin with, institutional changes need to happen to ensure that someone is responsible for reducing road deaths and to improve the quality and quantity of public transport for users. I propose:

The Minister of Transport should be made to bear full political responsibility of such tasks and be made accountable to the Malaysian public regularly.

Malaysia’s high road accident rate should be a wake-up call about the seriousness of the issue, we must act urgently beyond blaming drivers’ attitudes and building expensive infrastructure.