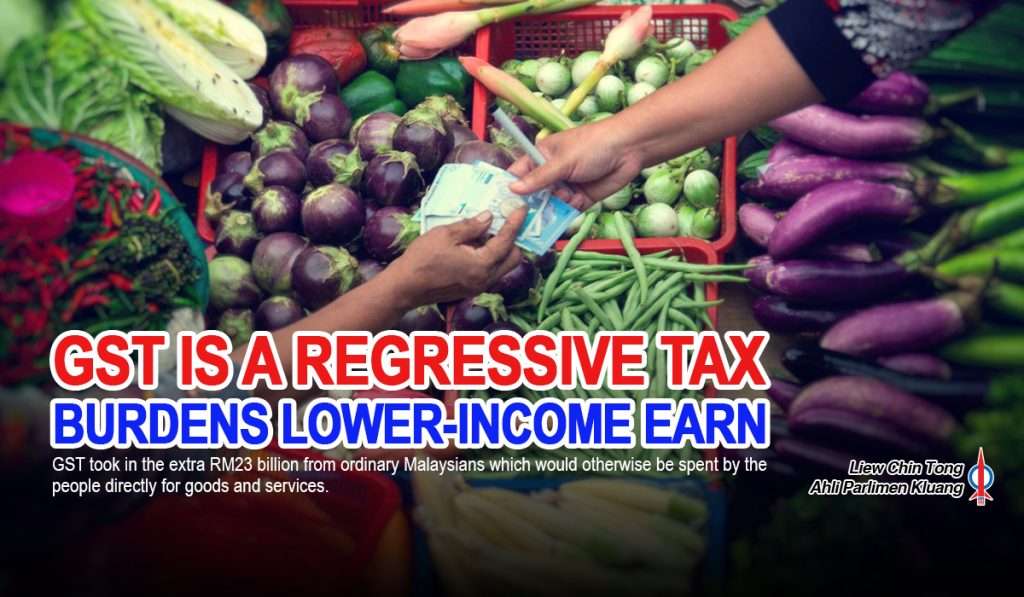 The debate on Goods and Services Tax (GST) is likely to continue to dominate public discourse as its negative impact is keenly felt by lower income families as well as reflected in the stagnation across domestic consumption sectors.

I am often frustrated that even senior politicians or public policy thinkers have very little understanding of basic economics and its effects in the real world. More often than not, many of them accept neoliberal ideas as norms without questioning it.

It is a given that Barisan Nasional will find all sorts of justifications for the implementation of GST so I don’t expect them to be intellectually honest.

For the rest of society, especially among public policy thinkers and economists, we must at least be on the same page in our understanding of progressive tax and regressive tax. Whether a tax is progressive or regressive depends on its distribution effect on income or expenditure.

Progressive taxes are imposed in an attempt to reduce the tax incidence of people with a lower ability to pay, as such taxes shift the incidence increasingly to those with a higher ability-to-pay.

The philosophical basis of the progressive tax are:

a) The higher income earners are able to make their income thanks to their own efforts but also the public goods such as public security, legal protection, education, etc are provided by the society, and therefore they should contribute to their general upkeep;

b) In the spirit of solidarity, the higher income earners contribute more to reduce the tax burden on the poorer counterparts; and

c) High levels of income inequality threaten the cohesion of communities; therefore society make political choices through taxation and other methods to ensure some extent of distributional justice.

For instance, both the rich and the poor have to consume food and other essentials. The income elasticity of demand of food is usually less than 1 (inelastic), which means they are necessity goods, and therefore as a household’s income rises, the tax collected on the food remains almost the same. Therefore, as a proportion of available expenditure, the relative tax burden falls more heavily on households with lower incomes.

The argument that GST is “fair” when one is taxed more when he spends more did not take into consideration that the rich would have a lot more income that they can save while the poor are usually stretched to the maximum of their income. Hence a much higher proportion of the poor’s income would go into GST than the rich. As such, GST has a regressive effect on income distribution.

GST is of course a great help to the Barisan Nasional Government as it came at a time when the oil price dropped sharply from October 2014, filling the revenue gap seamlessly without the Government having to make much painful adjustments brought upon by the sudden fall of oil prices.

But to the ordinary households who have not seen increase in their income, GST eats into their disposable income. Their incomes are more or less the same over the past years, some could even suffer cuts due to slow growth or declining prospects of some sectors such as oil and gas. But now they have to pay for GST which was never there. As a result, their disposable incomes suffer a serious cut.

The Government collected RM41 billion in GST revenue in 2016. Compared to the old sales and services (SST) which brought the Government a revenue of RM18 billion per annum, this means GST took in the extra RM23 billion from ordinary Malaysians which would otherwise be spent by the people directly for goods and services.

When almost everyone spends less, businesses suffer from less sales of goods and services, which explains the slow growth of retail and other domestic sectors. And when businesses suffer, at some point some companies would retrench staff, further aggravating the overall well-being of the economy.

Assuming that domestic consumption is the lubricant of the economy, especially in a time of unstable export as a consequence of a rather volatile and uncertain world, GST effectively “kills the golden goose”.

The Najib administration and some economists must understand why GST is so hated by Malaysians. Now is not the time to play around with neoliberal economic agenda.

Malaysia needs an economic agenda that works for millions of ordinary people, which in turn generates sustainable growth as a while. GST is not the solution to Malaysia’s economic woes.