Three-cornered fights may actually be bad for BN, PAS 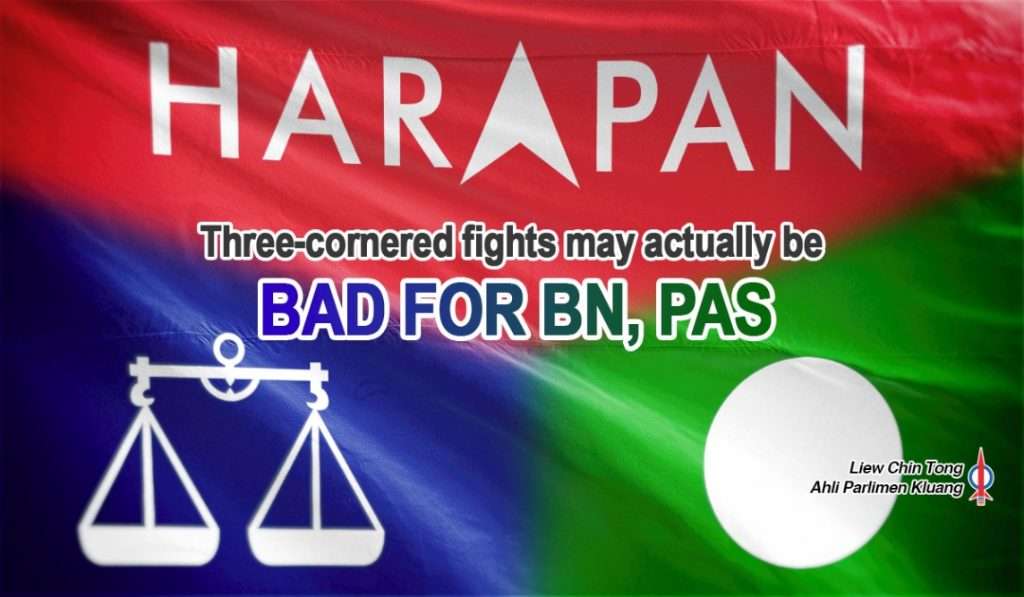 Contrary to popular belief, three-cornered fights between Barisan Nasional, Pakatan Harapan and PAS in the coming general election may affect BN more negatively than anyone else. PAS may even suffer a worse fate.

The outcome of the next GE will be stark. It is either another 10 years of Najib’s kleptocratic rule or a fresh start with a new Pakatan Harapan. When the 2013 general election concluded, Prime Minister Najib Razak knew that he would not win if it were a direct fight between Barisan Nasional and Pakatan Rakyat, and a fight between Najib and Anwar Ibrahim.

Therefore, Najib had tried to reshape the scene so that he could win by default through
a) Removing Anwar Ibrahim as the common leader for the Opposition coalition;
b) Luring PAS into UMNO-BN’s fold;
c) Painting the Opposition as DAP-led and with only Chinese supporters.

But what Najib did not realise that he himself was and still is the source of problem.

Najib and the 1MDB scandal have caused unprecedented splits in UMNO, resulting in the sackings of Muhyiddin Yassin and Shafie Apdal from the Cabinet in July 2015, and the subsequent formation of Parti Pribumi Bersatu Malaysia in September 2016.

The Najib Government has been luring PAS since March 2014 ostensibly on the pretext of promoting unity among Muslims. The efforts to bring PAS into UMNO’s fold intensified after the passing of Tok Guru Nik Aziz Nik Mat in February 2015.

The split in PAS in June 2015, resulting in the formation of Parti Amanah Negara in September 2015, is an intense struggle between the following forces:
Those who want to work with UMNO/Najib (Hadi Awang’s group) and those who are against working with UMNO/Najib (those who later formed Amanah);
Those who do not want to work with the Pakatan parties such as PKR and DAP and those who want to replace UMNO through the Pakatan coalition;
Those who push for a Muslim-only agenda and those who promote a Bangsa Malaysia agenda.

The earthquakes in UMNO and PAS in 2015 have had a huge impact on the national political landscape.

There will be some voters who voted for UMNO in 2013 shifting to Pakatan Harapan due to antipathy against Najib and UMNO. There will also be some who voted for PAS in the last election switching to Harapan due to their disagreement with the idea of PAS cooperating with UMNO when its leader Najib is burdened with the country’s worst scandal.

Other factors include the combined economic impact of the implementation of GST, the depreciation of ringgit and the removal of subsidies. Many lower middle class families are affected by an increasingly difficult economic conditions for ordinary Malaysians.

Therefore, all previous assumptions may not be applicable in the new scenario.

But if Pakatan Harapan is a strong and attractive alternative government catering for those who are against Najib’s kleptocratic rule and those who wishes to see a fresh start for Malaysia, both UMNO and PAS would be only left with their most hardcore supporters, with the rest swinging to Pakatan Harapan.

In such scenario, those voters who are loyal to Hadi’s PAS, which has become a spokesperson for the Najib Government, could have voted for UMNO in a straight fight but would actually disadvantage UMNO if it is in a three-cornered fight.

What is required of Pakatan Harapan is to provide clarity to the voters to differentiate Pakatan Harapan from Najib’s UMNO and its associate PAS, and to explain to all that a vote for PAS is a vote for Najib. Even PAS supporters could be convinced if they realise their beloved leaders are now colluding with Najib to do more damage to the country.

A strong, purposeful and united Pakatan Harapan would eventually force UMNO to abandon the three-cornered fight strategy as such strategy would mean UMNO does not benefit from Hadi’s loyal voters who would otherwise vote for Najib.

We don’t live in an ordinary time. We must rise to the occasion to see through our opponents’ strategies and fight them with clarity and purpose.