Failure of Najibnomics – blaming the victims, scoffing at people 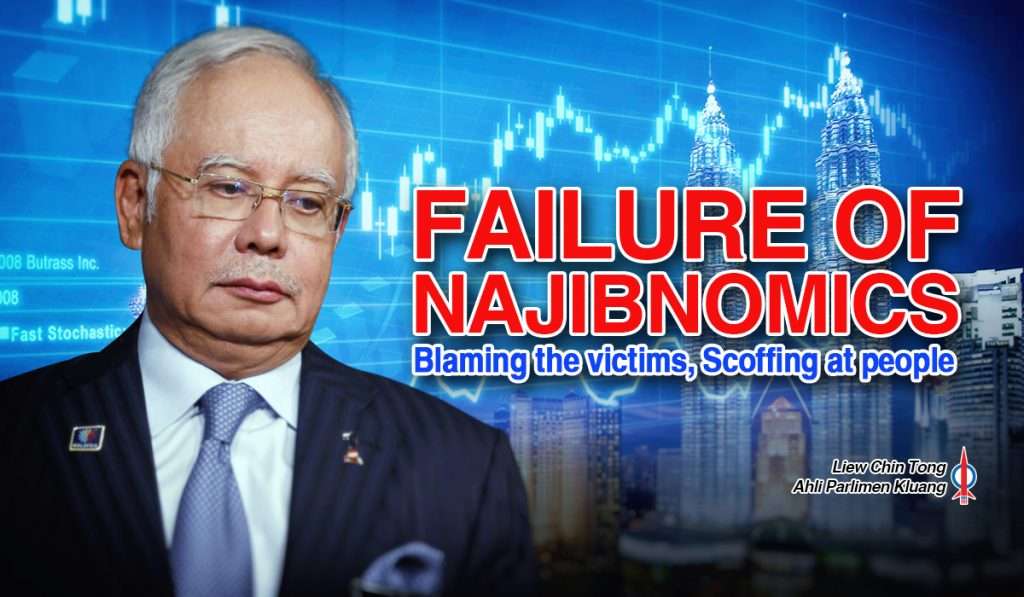 When it comes to economics, the Najib Razak government is both arrogant and ignorant. It doesn’t understand the livelihood of ordinary folks and is not prepared to concede that Najibnomics is not serving the needs of Malaysians. Whenever concerns are raised, the immediate reply is to blame the victims who complain.

Last weekend, Najib blasted those who criticise his GST policy. For him the 6% regressive tax is good for Malaysia and no one should whine or complain about it.

I am further stunned with the claims made by Treasury secretary-general Irwan Serigar Abdullah who said: “If people are poor, I believe that they have made themselves poor. If they have arms and legs and can walk, they can survive in Malaysia.”

Irwan said that there is no reason that Malaysians should be poor because there are plenty of opportunities for them to be well-off.

According to him: “When some say Malaysia’s economy is lagging behind, the people are poor, they’re wrong. We are not like debt-ridden Bangladesh and we are not like the Philippines. They (those who say Malaysia is poor) are confusing the rakyat.”

In the 1985 and 1997 economic crises, respectively, at the least the Malaysian Government was prepared to admit that there was a crisis, and it needed to respond (although at that time, Dr Mahathir Mohamad and his deputy Anwar Ibrahim quarrelled over the choice of remedy).

What we are facing now is a “silent crisis” that the Najib government refuses to acknowledge at all. Instead the government either sings its own praises or blame the victims like Irwan did when ordinary Malaysians are suffering.

Since the last general election, as a result of the combined effect of the implementation of GST on 1st April 2015, the 30% depreciation of the ringgit since October 2014 and the successive subsidy cuts, prices have gone up in general. This is eating into people’s disposable income and hence hurting domestic consumption.

All these happen at a time when wages do not go up because there was no attempt to reduce the influx of unskilled foreign labour and or government intervention to help industries to move up the technological ladder.

Increasingly, Malaysians are seeking employments overseas. Daily commute to Singapore from the Causeway increased from 200,000 to 300,000 in the past four years, many choose to work in low wage 3D (dirty, difficult and dangerous) jobs there. Malaysians have also been known to work illegally in United Kingdom and Australia.

The government needs to acknowledge that there is a crisis before it can deal with it properly. It must stop blaming the victims and scoffing at suffering Malaysians. Najibnomics doesn’t care about ordinary people.