How did Malaysia lose its bid for a seat on the UN Human Rights Council? 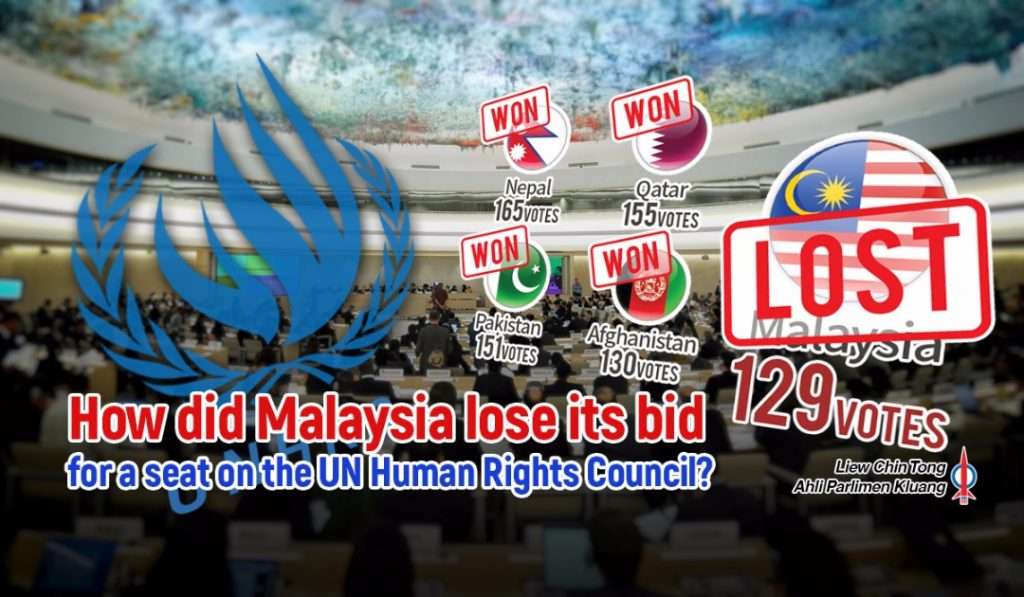 I will be submitting a Parliamentary Question for Minister’s Question Time on Tuesday 24th October 2017 to give Foreign Minister Anifah Aman the first available opportunity to explain why Malaysia failed in its bid to be elected to the United Nations Human Rights Council.

There were five candidates contesting the four Asia-Pacific seats on the Council. Election was conducted by secret ballot at the General Assembly. Nepal topped the Asia-Pacific group with 165 votes followed by Qatar with 155, Pakistan 151, Afghanistan 130 and Malaysia 129.

It is shocking that Malaysia failed in its diplomatic effort and Parliament deserves to know what had happened.

Anifah should also disclose in Parliament how much it costs Malaysia to lobby and campaign for the position.

According to the filling made by Malaysia’s Permanent Mission to United Nations in January this year, the Government of Malaysia made the following pledges and commitments:

“If elected to the Human Rights Council, Malaysia pledges to:

• Engage constructively in the evolving modalities of work of the Human Rights Council to further enhance its role as a strong, fair, effective, efficient and credible institution entrusted with the promotion and protection of human rights worldwide and fundamental freedoms for all;

• Nurture a spirit of cooperation within the Human Rights Council, based on the principles of mutual respect and dialogue, free from acrimony and politicization;

• Actively support international action to advance the rights of vulnerable groups such as women, children and persons with disabilities.

Towards fulfilling these pledges, Malaysia is committed to:

• Upholding the principles of dialogue and cooperation among all stakeholders in furthering the promotion and protection of human rights for all peoples;

• Supporting and implementing the 2030 Agenda for Sustainable Development, particularly with regard to realizing the right to development, including by supporting ongoing efforts aimed at its operationalization and implementation;

• Sharing best practices, experiences and achievements on the realization of human rights, including advancing the rights of women, children and persons with disabilities, and on poverty eradication, health and education, with interested partners

• Engaging constructively with all stakeholders to ensure that the international community continues to create a supportive external environment towards the creation of economic stability, shared prosperity and equitable gains from globalization;

• Engaging continuously with all stakeholders to assess and monitor the implementation of recommendations from the universal periodic review process;

• Working continuously at the regional level with its partners under the ASEAN framework, and in particular with the ASEAN Intergovernmental Commission on Human Rights in the promotion of human rights in the region

• Continuing to support the role and function of the national Human Rights Commission of Malaysia (SUHAKAM), including activities being implemented such as educating the public on human rights;

Intensifying efforts to raise human rights awareness among all segments of the population, including law enforcement officials, members of the judiciary, government officials and other stakeholders.”