Development Allocation: for Najib, not for the rakyat 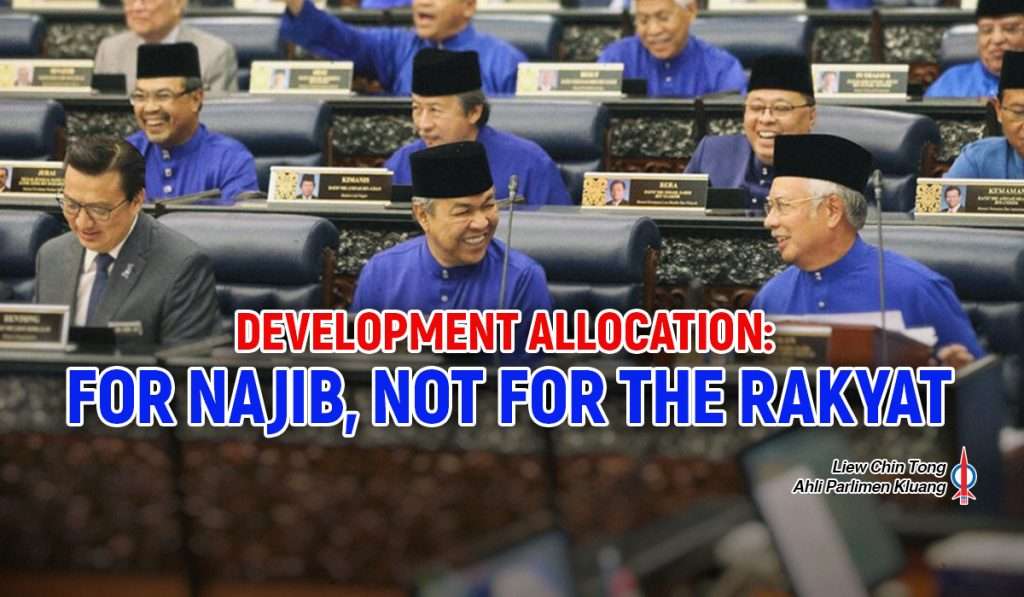 The Prime Minister and Finance Minister Dato ‘Seri Najib Razak declared Budget 2018 to be the “mother of all budgets”. In fact, the primary purpose of the Budget 2018 was to empower Najib to consolidate his political position. While not much was left for development.

Comparatively Najib’s first budget as Prime Minister in 2010 was only RM 190 billion. This means the budget has been increased by 67% since then.

Development allocation in absolute figure was higher in 2010 at RM51.2 billion , while the budgeted amount for this year is only RM46 billion. If you take into consideration inflation and depreciation of ringgit, it shows the shrinking of our development budget in a big way.

It is shocking to see that the actual development spending for 2013 to 2016 was very low. Especially in 2014, the amount was not even RM40 billion, which means there was hardly any development under Najib!

Budget Comparison with Real Expenditure for Year 2010 to 2018

The amount of development expenditure announced is not necessarily the actual amount spent. For example, the development budget for the year 2016 amounted to RM50 billion, but the actual amount that was spent was only RM 42 billion. No wonder there were hardly any upgrading of roads, hospitals and schools.

Instead, the lion’s share of the budget went to the Prime Minister’s Department (PMD), which claimed 26% of the total allocation for development expenditure compared to just 8.1% in 2008.

The PMD will now receive a total of RM17.43 billion from Budget 2018 while allocations for operating and development expenditure were only RM5.2 billion and RM12.21 billion respectively. This amount given to the PMD is extremely high, especially when allocations to other ministries such as education, welfare, and health were disproportionately inadequate.

Although PMD oversees 92 departments and agencies, this is not a justification for such unnecessarily high allocation at the expense of other crucial needs such as healthcare and education whose budget reduction would hit ordinary Malaysians hard.

In the first place, there are many departments and agencies which should not be placed under the PMD. To prevent overlapping and coordination issues, it makes more sense for those agencies to be placed under the relevant ministries. For instance, the Land Public Transport Commission (SPAD) should be under the purview of the Transport Ministry. Majlis Professor Negara should be under the watch of the Ministry of Higher Education and Permata should arguably be handled by the Ministry of Education instead.

These “Slush Funds” were invented by Najib

Most of the development provision for the PMD can be described as ‘slush funds’. These kind of funds did not exist in the past but was invented in the era of Najib’s administration as Prime Minister and for the purpose of his political survival.

When I delivered my speech on Budget 2018 in Parliament on Monday, 30th October, former Minister of Finance, Tengku Razaleigh Hamzah was in the House. It was Tengku Razaleigh who told me that during his tenure in the Finance Ministry, all additional spending that had not been budgeted required the approval of the Finance Minister. He said that back then, there was hardly any discretionary spending.

Only the Prime Minister has the absolute power to determine how these “slush funds” are to be spent. This is a huge amount under the absolute discretion of the PMD, and there is little accountability and transparency as to how the money is to be spent.

The slush funds for 2018 has been increased by RM2 billion as compared to 2017. The details of this spending are usually not submitted to MPs, and receive even lesser scrutiny from the public.

The truth of the matter is that the parliamentary institution itself has been controlled and undermined by the ruling party for a long time, as such the authorities are practically powerless to scrutinize the spending of these ‘slush funds’.

It would not be a stretch of the imagination to say that such ‘slush funds’ are used by the Prime Minister to procure loyalties especially in view of the impending general election.