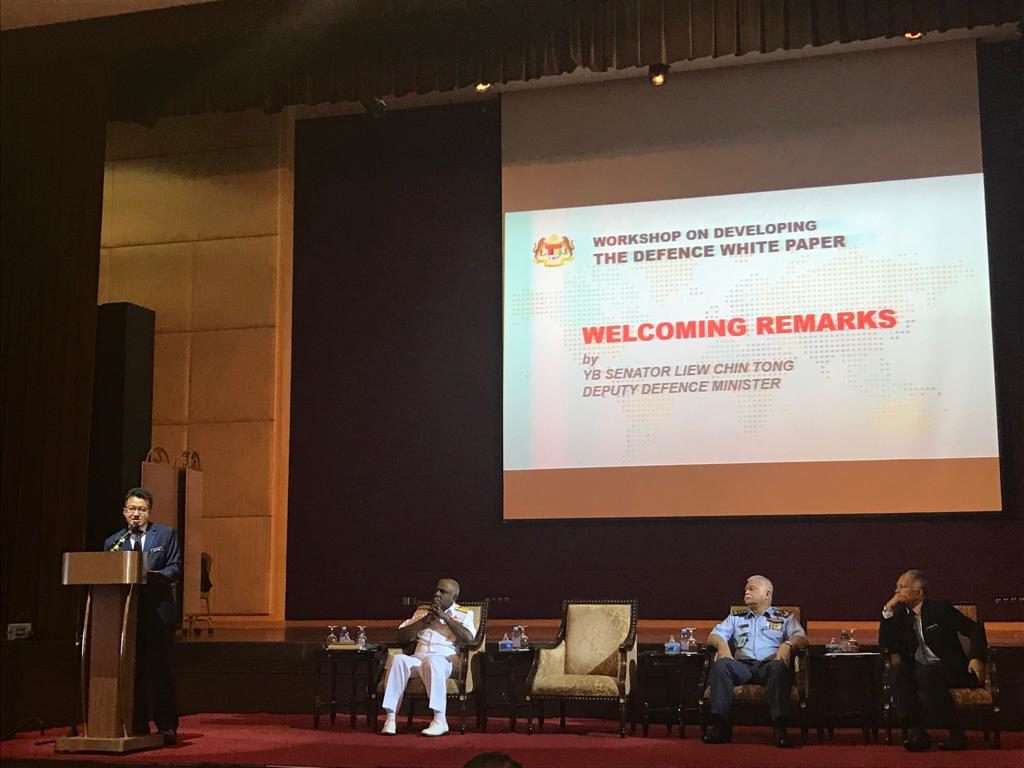 This is the first in a series of several workshops to be conducted by MIDAS – the Malaysian Institute of Defence and Security, and the Policy Division of the Ministry of Defence. It is part of a consultative and consensus-building process designed to ensure that the Defence White Paper (DWP) we produce accurately reflects the challenges and opportunities we have been with presented now and in the next ten years.

The last known review of the classified version of the National Defence Policy (or NDP) was in 2006; a declassified version was then released in 2010 for public consumption. Since then, the world has changed significantly. Cyber capabilities have advanced at an exponential rate and in some instances pose a serious threat to stability; China has been and is still on its meteoric rise, cementing its status as a Great Power, and with this rise comes new capabilities and policy options for them. Indeed we are in the end of a 30 year era since the fall of Berlin Wall in 1989, where US has been the dominant world power, and is in an increasingly multipolar world. Thus, it is important to go back to these original ideas, have a frank discussion about them, and plan for the future to our best ability.

Two weeks ago, the Prime Minister made clear his support for the White Paper process during his visit to MinDef, providing us key guiding principles, specifically that we should be keenly aware of the transnational nature of unconventional threats, whether it be via cyber attack or terrorism, that the domestic defence industry must evolve to fulfill our goal of self-reliance in defence and not just rely on commission agents, and that MinDef must emphasize heavily the integrity of its procurement and finances.

As many of you will note, these guiding ideas from Tun Mahathir reflect much of the current trends in international relations, security, and defence. In  a similar vein, the White Paper will set out to do outline much of that, and so much more. In this, we hope that our consultative process will build consensus within the government and society towards a common understanding of national defence. This reflects our whole-of-society, whole-of-government approach that is encompassed by our concept of Pertahanan Menyeluruh, HanRuh, or Total Defence.

Furthermore, this process will also create a space for discourse to get both the civil service and the military to ask the difficult but important questions regarding the future of the military and national defence. This is a reflection of our society maturing as a democracy, giving room for ideas to flourish and  to tolerate constructive criticism. Thus, in the spirit of such a discourse, the workshop has been organized so as to generate quality discussions surrounding the following; Global Trends & Strategic Challenges for Malaysia, The Complexity and Risks of Non-Traditional Security Threats, Defence Approach & Strategy, Future Force, Defence Industry, Science and Technology, People in Defence, and Implementation.

Evidently, the discussions are  not just about defence strategy planning play out in a war-room setting, but also taking into consideration other elements that would contribute to the success of defending this country, such as a Future Force with forward-looking resource planning, the welfare of our soldiers and a self-reliant defence industry. Equally crucial is the discussion of the integrity of the operations, procurement, and finances of MinDef. Because it sets out exactly the principles and broad directions in which MinDef and the military will go from a development perspective, it will provide the public the necessary information and standards with which to hold us accountable. Malaysians of this new democracy expects no less than this level of accountability for MinDef and must be made understood the critical necessity of these seemingly voluminous expenditures.

In this, I am reminded of a quote from General and later President Dwight D. Eisenhower: “In preparing for battle, I have always found that plans are useless, but planning is indispensable.” The consultation process of the Defence White Paper is just as important as the final outcome that we produce. No doubt, different views will arise, but the mere ability to ask these questions gives us a hitherto unspoken opportunity to do much good for our nation.