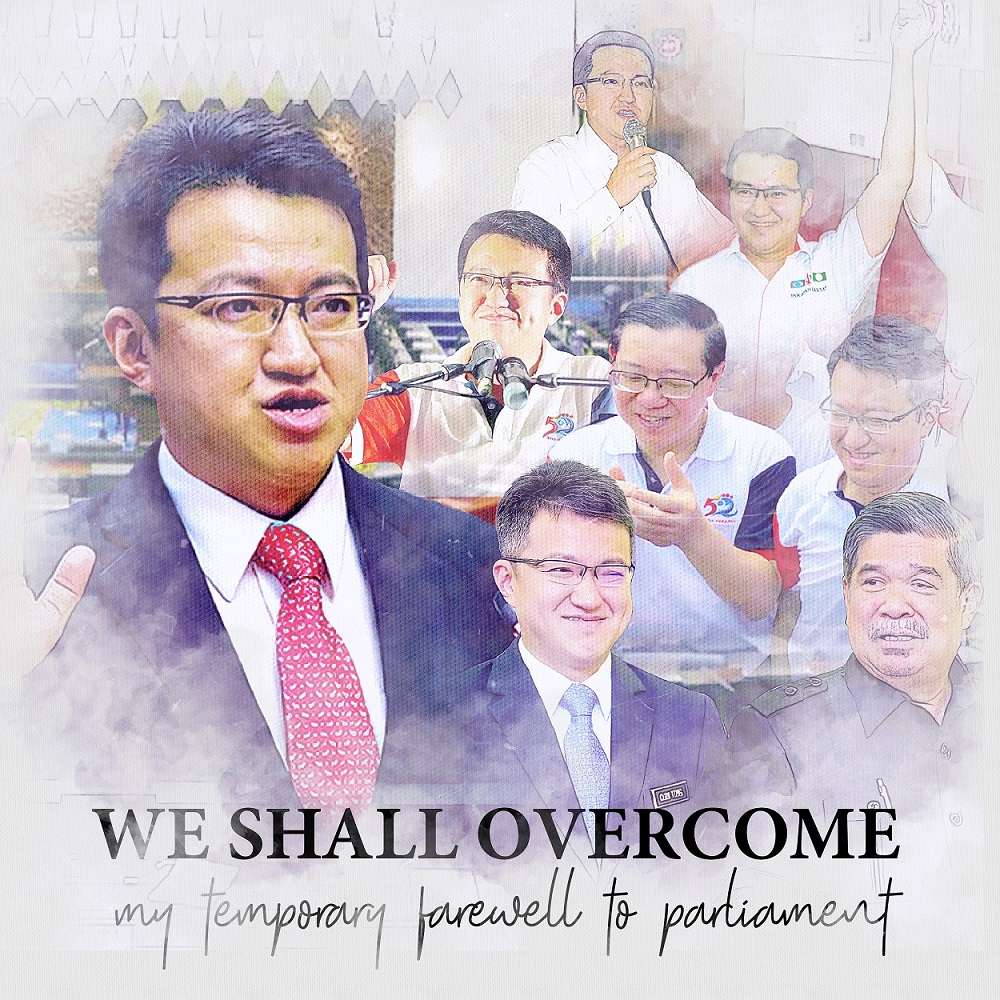 As my senatorship expires this Friday 16 July, I am bidding a temporary farewell to the Malaysian parliament, both the Dewan Rakyat and Dewan Negara, the august institution that I have been honoured to serve since I was first elected a Member of Parliament in 2008.

With the blessing of and nomination by my party, DAP, I intend to contest the next general election, and hopefully the voters will return me to Dewan Rakyat once more.

Thirteen years ago, the voters in Bukit Bendera, Penang, elected me to Parliament via the gigantic political tsunami which almost no one foresaw. In 2013, together with Lim Kit Siang and Teo Nie Ching, I moved to contest in Johor, and was elected MP for Kluang.

In the 2018 general election, I moved to Barisan Nasional’s stronghold of Ayer Hitam to challenge the incumbent MCA president Datuk Seri Dr Wee Ka Siong to signal to the voters that it was a do-or-die battle.

On 9 May 2018, we – the people of Malaysia – won and defeated the world’s then longest-serving elected one-party state. However, I lost Ayer Hitam marginally. I was sworn in as senator, as well as deputy defence minister, on 17 July 2018.

The nation is now at a crossroads. We suffer under Tan Sri Muhyiddin Yassin’s failed emergency rule and deteriorating administration, and no one wants Tun Dr Mahathir Mohamad’s proposal for an unelected body of another emergency government, or just any other form of non-democratic rule.

At the same time, despite the pandemic, UMNO leaders including Datuk Seri Ahmad Zahid Hamidi prefer a snap poll which would allow him and Datuk Seri Najib Razak to use the general election as a get-out-of-jail pass and as a way for Zahid to get rid of his internal rivals within UMNO in his capacity as party president by not nominating them as candidates.

Since I entered parliament more than a decade ago, Malaysians have been witnessing UMNO’s slow collapse, from its past total dominance to the current state of fragmentation. In these 13 years, almost half of the voters had chosen a non-UMNO alternative. The opposition received 47%, 51% and 48% of popular votes in the 2008, 2013 and 2018 general elections, respectively.

The Sheraton coup of February 2020 ended Pakatan Harapan’s short stint as government. Yet, today, 16 months later, Perikatan Nasional’s dua darjat divisiveness, arrogance and disastrous performance discredited the idea of a “Malay-Muslim government” being a better form of government and paved the way for Malaysians of all ethnic groups to imagine an empathetic leadership that is not race- or religion-based.

Malaysia clearly needs a reset and our parliament could herald a new dawn. The reset must begin with all parties recognising that no single party has a majority, and no one could ever dominate over others again. We must strengthen our parliamentary democracy together.

The bright side of this ongoing crisis is that even the Yang di-Pertuan Agong and the Malay Rulers agree that the parliament is the most suitable avenue to settle political differences, as evident in the 16 June royal decrees. The Muhyiddin’s government must end the emergency rule and allow the parliament to test its majority.

The next government should also concede that no party will ever return to the pre-2018 UMNO hegemony era, and the days of government-knows-best are long gone.

If the government continues to be secretive, and if the executive allows for only the ministers and select few civil servants to dictate plans, policies and decisions, they have to be prepared to face massive anger, backlash and distrust from among the increasingly savvy public.

The parliament, with a functioning and inclusive committee system, must be an avenue for the government and opposition to build consensus and to find compromises. It also needs to get feedback from the wider public, and to have checks and balances to prevent the government from making mistakes that are too grave to repair.

There are three categories of senators: first, 26 to represent 13 states and indirectly elected by a state assembly motion; second, four to represent the federal territories; and third, 40 appointed by the King at the recommendation of the Prime Minister.

My hope is that one day all senators are elected directly by voters through the ballot boxes, just as the senators in Australia. They should represent the interests of their respective states, with Sabah and Sarawak having higher weightage.

I am a democrat at heart. I don’t believe in a zero-sum game. There is no need to eliminate our political opponents, even though UMNO had wanted to finish off DAP/Pakatan Rakyat/Pakatan Harapan in the past decade or so. The fact that DAP is still around is a testimony of the failure of these attempts to eliminate the party.

We need to co-exist. We need to build bipartisanship and respect our opponents. Parliament is the avenue for such civilised engagements.

Democracy means we should appreciate differences as strengths, and not as weaknesses. In democratic countries, parliaments are never established to force uniformity. On the contrary, they are built to accommodate differences.

Some people are frustrated with our parliament because they see politicians quarrelling with each other, sometimes behaving like naughty children.  Malaysian politicians rarely debate policies properly.

We need every politician to recognise that their role is more than just giving handouts. They are elected to think, deliberate, and decide on good public policies for the society and the nation. Democracy needs to deliver progress and improvement to daily lives, and the people’s wellbeing.

Politics can sometimes be a very lonely journey. Max Weber (1864-1920) wrote that politics is a vocation for someone “who is certain that it will not break him when, from where he stands, the world looks too stupid or mean for what he wants to offer it—that in spite of everything he will be able to say ‘but, still!’—only he has the ‘call’ for politics.”

I am fully cognizant that Malaysia at this juncture is in the darkest of nights. But I believe there is a bright side. And we shall not give up. We shall overcome, soon.