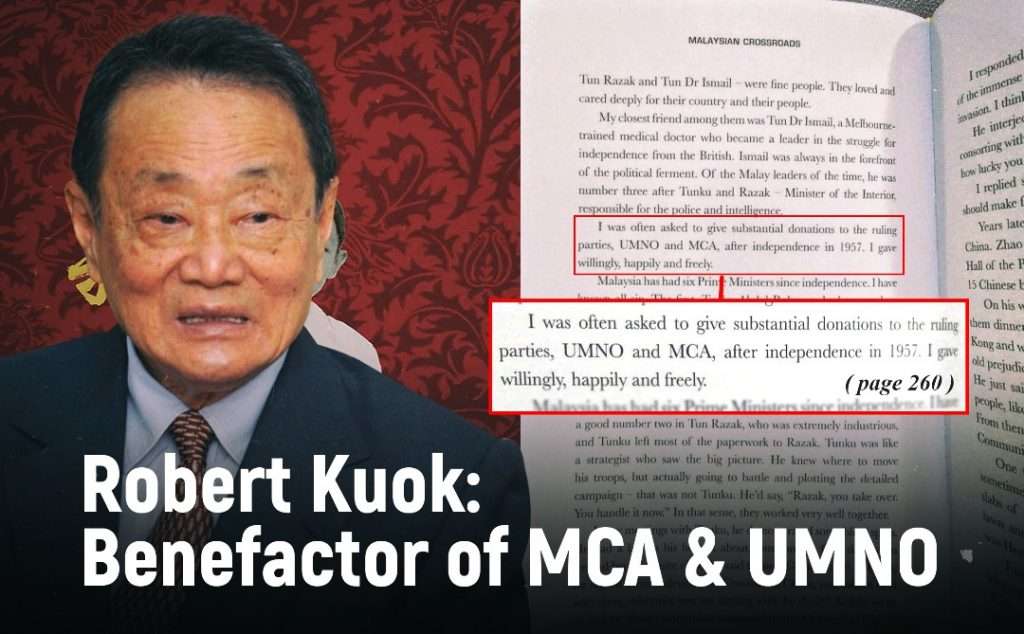 This is my view on racial politics and the escalation of fake news among UMNO leaders, and it involves their attack on a billionaire that has helped them before.

By now UMNO strategists would have realised that their President and Prime Minister Najib Razak had just overdid with the Robert Kuok incident, and had to pause for a moment with his press secretary Tengku Sharifuddin’s clarification over the issue.

What had happened was not an isolated case. It has been the modus operandi of UMNO since July 2005, and it had gotten worse since the March 2008 election.

Racial politics in Malaysian politics since Independence can be divided into broadly four periods:

First, the laissez faire period of 1957 to 1969 – a noisy, unhappy but relatively tolerance in the first decade of Merdeka;

Third, the Vision 2020/Bangsa Malaysia period of 1991 to 2005 – the emergence of the idea of Malaysians coming together vis-à-vis foreign nations and less of internal divisions;

Between the May 13th incident and the 1990 general election, ethnic relations in Malaysia was full of distrust and discontent. The worst was in October 1987 following an UMNO party election in April 1987 which saw the contestation between Team A and Team B.

The October 1987 crisis led to Operasi Lalang which saw more than a hundred activists being arrested under the Internal Security Act (ISA). It was the time when Tun Dr Mahathir Mohammad was the Prime Minister and Najib the UMNO Youth Chief who was the main instigator-in-chief over the Chinese education issue.

But ethnic relations saw a 180-degree improvement when Dr Mahathir proposed Vision 2020 and the idea of Bangsa Malaysia. The economy was good which provided the material basis for good time. More importantly, there were concerted efforts to create a sense of national identity and play down ethnic differences.

One such moment was the winning of Thomas Cup in 1992. When Dr Mahathir needed an enemy, it was always the Jews, Americans, Australians, the British and Singaporeans. It was rarely anything domestic. The non-Malay electorate rewarded Mahathir and Barisan Nasional with very huge support in the 1995, 1999 and 2004 general elections.

The July 2005 UMNO Assembly was the turning point. The then Prime Minister Tun Abdullah Badawi lost control of his centrist and reformist agenda, barely a year after the victorious 2004 general election. UMNO decided to pursue a Malay agenda and to appeal to the hardcore instead of the middle ground.

Instead of moving back to the centre, UMNO dug in further in the past decade. Every other week there was a manufactured crisis caused by fake news. Yes, even then fake news had existed.

UMNO under Najib has nothing to offer to Malay voters apart from manufactured fear.

The line of thought is that the Opposition is dominated by DAP, and DAP is Chinese (which is not true at all), and therefore, voting for the Opposition is a vote for a Chinese prime minister. Such nonsense has been promoted by taxpayer-funded agencies such as JASA or Biro Tatanegara for ages, especially in the 10 years.

Context of the Robert Kuok incident

The Robert Kuok incident has to be understood in the following context: Fake news manufacturer Raja Petra Kamaruddin sold the story that Robert Kuok has apparently been funding DAP through his nephew James Kuok. Utusan Malaysia picked up RPK’s vicious lie, and TV3 developed the story further. It was the same modus operandi.

Then Najib jumped in, telling Robert Kuok to be grateful to the Barisan Nasional government. Suddenly the entire UMNO leadership jumped into the fire after the Prime Minister opened the floodgates.

If only these people had read Robert Kuok’s memoirs, they would find that the Malaysian billionaire had reserved several pages to say some very unpleasant things about his nephew James Kuok.

RPK created his fantasy/ story just based on photos of some DAP leaders’ visiting James Kuok’s Sri Nyonya restaurant in Petaling Jaya, Selangor. But in the era of fake news, no one bothers to check the facts.

The Robert Kuok incident is not an isolated incident. It is just another example of the past decade or so in which UMNO survives on manufacturing fear among Malays towards others, in the hope to consolidate Malay support for UMNO.

The strategy didn’t really work in 2013 as UMNO lost urban Malay support (for instance, losing Selangor and Kuala Lumpur) and there wasn’t any uniform swing in UMNO’s favour. UMNO increased vote share by 6 percent in Kedah due to the Mahathir-Mukhriz factor but lost 6 percent support in Terengganu – both Malay super majority states.

The fear factor might have helped UMNO to keep some semi-urban and rural seats. But even that, the question is, was it because of Malay fear or the Opposition wasn’t strong enough to campaign all out in these areas?

The way forward is for Pakatan Harapan to emerge with a narrative that resembles the Vision 2020/Bangsa Malaysia period which brings everyone together for a larger national mission that no longer needs to divide the people in fear but builds the nation in trust.