There is no better time than now for parliamentary reform 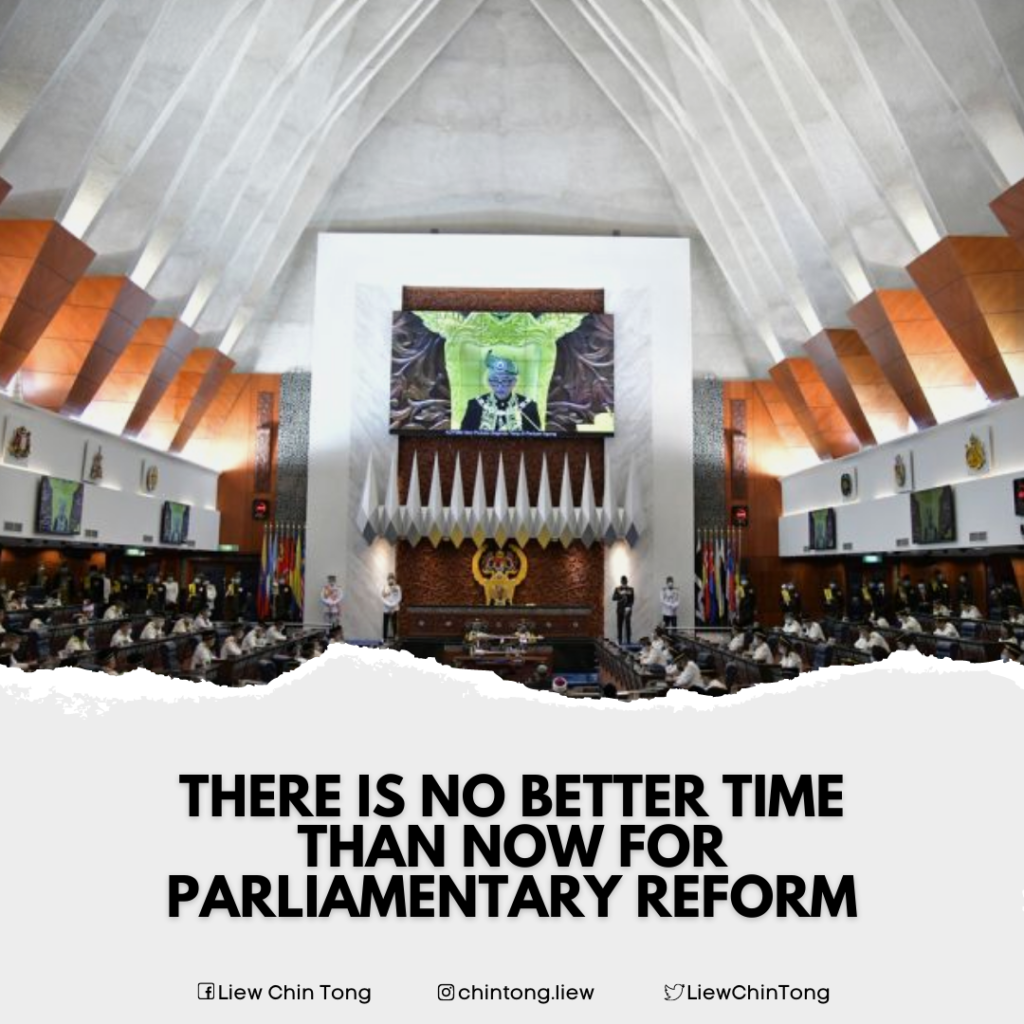 I would like to first congratulate Idzuafi Hadi Kamilan, Executive Director of Institute for Political Reform and Democracy (REFORM), for his excellent 93-page report examining the establishment of the parliamentary service commission.

These ‘autonomies’ could only be achieved through the establishment of a parliamentary service commission to reverse the harms done on parliament via the abolition of the Parliamentary Service Act 1963 in 1992.

Hadi’s paper, which he laboured for a long time, is fortuitously timely as there is no better time in the entire Malaysian history than now for parliamentary reform.

There are at least five important matters to consider.

The great importance of the parliamentary institution has been highlighted throughout the recent crisis to return Malaysia from emergency rule back to normalcy. The nation now appreciates the roles of parliament after experiencing its absence.

Not only ordinary Malaysians were talking about parliament, even the King and the Malay Rulers, in their statements on 16 June 2021, were at the forefront calling for the Parliament and the state assemblies to resume sitting.

Another interesting development is that the leadership of Malaysia’s former dominant party UMNO, which ruled for 63 years between 1955 and 2018, was championing the reopening of the parliament.

It will be interesting to see how committed UMNO is towards parliamentary reforms now that the new Prime Minister Dato’ Seri Ismail Sabri comes from UMNO, though he is seemingly at loggerheads with the party’s leadership.

Second, the end of winner-takes-all.

The only way to deal with a 50-50 parliament and a 50-50 electorate is to accept that the parliament must be fair to both the government and the opposition, as the rotation of powers between the parties are going to be a part of our national reality.

A fair and rule-based parliament will allow for bipartisanship to thrive, which is most needed now so that the nation can overcome the pandemic and to rebuild the economy.

Establishing bipartisanship is different from forming a unity government. It is the recognition that the government and the opposition could reach consensus on quite many matters through parliamentary debates and deliberations in the more collegial parliamentary committees.

Parliament is the platform and channel for bipartisanship. The talks of confidence and supply agreement (CSA) or reform deals should be placed in such context.

I congratulate Dato Sri Wan Junaidi Tuanku Jaafar for his appointment as minister for parliamentary affairs and I hope his deep understanding of parliament could help right the wrong inflicted by the actions and inactions of past ministers and speakers.

After I finished writing this speech, I am pleasantly surprised to read Wan Junaidi’s statement this morning stating his intention to revive parliament service act and amend the standing orders to keep up with time.

His statement augurs well for the transformation of parliament that Malaysians have waited for decades. I hope he will leave a legacy by making his tenure as the most transformative period of the Malaysian parliament.

To understand the context, we need to know about the appointment of my friend Dato’ Seri Nazri Aziz as the minister in charge of parliamentary affairs from 2005 until 2013.

Nazri was almost dropped from Tun Abdullah Ahmad Badawi’s cabinet after the 2004 general election. His name was only “pencilled” into the list at last minute before Abdullah’s audience with the King at the appeal by the then deputy prime minister Dato’ Seri Najib Razak.

Nazri had no portfolio in the first week, and the parliamentary affairs role was an afterthought. He had no ketua setiausaha or KSU (chief secretary of a ministry) or other bureaucrats to serve him, and was even ignored by the then secretary of Dewan Rakyat.

To exert his presence and impose his will on parliament, he managed to persuade the cabinet to take away the powers of the secretaries of Dewan Rakyat and Dewan Negara and restrict them to the affairs of the chambers only.

While Nazri is a jovial and friendly character whose presence MPs from both sides of the aisles enjoy a conversation with, and was able to promote some international causes via parliament such as democratisation in Myanmar, he did very little to reform the actual workings of parliament.

The administration of the parliament is now placed under a department run by a bureaucrat assigned by public service commission (JPA), responsible to the Minister, and NOT the speaker of the Dewan Rakyat or the president of the Dewan Negara.

In 2005, I called this Nazri’s ‘cannibalisation’ of parliament’s administration, which completed the downward spiral begun in 1992 which was caused by the massive quarrel between the then speaker Tun Mohamed Zahir Ismail and the then secretary of Dewan Rakyat Dato’ Haji Wan Zahir Sheikh Abdul Rahman (Hadi’s paper, pg 21-22).

For this, I hope Wan Junaidi would do a great service for the parliament and the nation by aiming to be the last minister for parliamentary affairs, and help end the position of ketua pentadbir.

In future, the official Leader of the House doesn’t have to be the prime minister anymore. In fact, Wan Junaidi could take over the position.

An experienced minister with deep understanding of parliamentary affairs such as Wan Junaidi could be assigned to be the official Leader of the House, just like in the Westminster or the Australian Parliament.

This minister-cum-Leader of the House manages parliamentary agenda in consultation with the speaker, leader of the Opposition, government chief whip, and opposition chief whip.

Finally, as Hadi pointed out in Chapter 2, prior to 1992, under the older version of Article 65 of the Federal Constitution, the positions of the secretaries of Dewan Rakyat and Dewan Negara were appointed by the King and could only be removed via a tribunal in a process like that of the removal of judges. The posts have now degraded to one that is lower than the ketua pentadbir.

As a gesture of goodwill and commitment to parliamentary reforms, new prime minister Dato’ Seri Ismail Sabri, and Wan Junaidi should reverse the travesty of justice committed by the Tan Sri Muhyiddin Yassin government.

I refer to the case of Encik Riduan Rahmat, the secretary of Dewan Rakyat, who was summarily demoted on 14 May 2020 to the position of secretary of management division of Dewan Negara.

Why was he demoted? Merely for accepting the no-confidence motion from former prime minister Tun Dr Mahathir Mohammad (pg 23). It was a cruel decision because Riduan had done the right thing and should not be punished for upholding the sanctity of the Parliament.

Again, I congratulate Hadi for his excellent work. The time for reform is now.