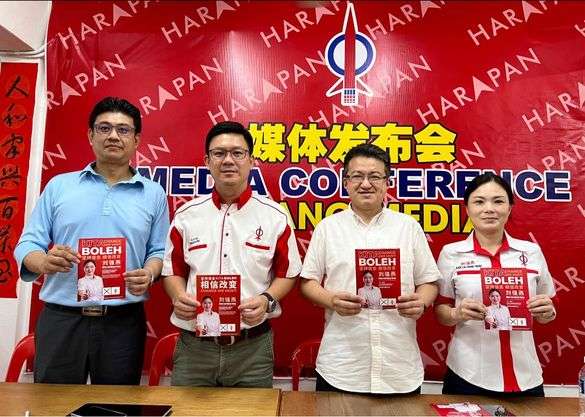 During my visit to Sibu and Sarikei, Sarawak, with Johor DAP State Secretary and DAP Party Whip in the Johor State Assembly Sdr Andrew Chen, I urged the voters of Sibu and Sarawak to vote for Pakatan Harapan candidates in GE15.

I have been campaigning in Sarawak for DAP candidates since 2006, before I was first elected as Member of Parliament in 2008. Each election, however hard the battles I fought, I would try to spend a day campaigning in Sibu and Sarikei due to the strategic importance of the seats.

Gabungan Parti Sarawak (GPS), formerly Sarawak Barisan Nasional, is trying to portray that they are the champions for Sarawak people but this is far from the truth.

A case in point. The reclassification of Sarawak and Sabah as “regions” rather than “states” via an amendment to the Federal Constitution in December 2021 was made possible by the Memorandum of Understanding (MOU) reached between Pakatan Harapan and the Ismail Sabri government. It was Pakatan Harapan’s sincere effort.

More importantly, Sarawak gained more when GPS (at that time, still Sarawak BN) fared poorly in GE14. In 2018, Pakatan Harapan won 98 seats in the Peninsula and six in Sabah. It was the surprisingly strong Pakatan Harapan’s showing in Sarawak of 10 seats that the coalition reached 114 at 12am on 10 May 2018, allowing Pakatan Harapan to form government on its own.

Prior to 2018, Sarawak and Sabah were considered BN’s fixed deposits. But what did the people get? BN centralised all powers in the hands of the Prime Minister, and Sarawak always got the short end of the stick.

It was only with BN’s defeat that Sarawakians see progress in the advancement of their rights and interests.

Who is telling the truth? Sarawak Premier and GPS Chairman Datuk Patinggi Tan Sri Abang Johari Tun Openg has denied that he was in the know of any discussions concerning GPS supporting UMNO after GE15. On the other hand, UMNO President Datuk Seri Ahmad Zahid Hamidi told the reporters that BN would win with a simple majority with seats contributed by GPS and the Sabah parties.

Malaysia’s parliamentary system is such that governments are elected through electing MPs. In this general election, Malaysians will have to choose a government among the three main coalitions, namely, Pakatan Harapan, Perikatan Nasional, and Barisan Nasional.

Much as Sarawak has its own set of parties and political dynamics, when it comes to this federal election, eventually, either Dato’ Seri Anwar Ibrahim, Tan Sri Muhyiddin Yassin, or Zahid who is facing court charges for corruption, would be the next Prime Minister.

Just fefore the Parliament was dissolved, I was briefed on UMNO’s thinking.

A month after the Parliament was dissolved on 10 October, UMNO has lost a lot of grounds. BN’s seat count is said to be around 50 only, with the possibility of further slides. In the meantime, Zahid proved to be a very toxic leader to the national electorate, to the point that Abang Johari and GPS had to keep disassociating themselves from the UMNO President.

A vote for GPS is actually a vote for Zahid-led UMNO, however Abang Johari and GPS deny it. And it will be a bleak future for Sarawak and Malaysia if Zahid is Prime Minister.

Both Pakatan Harapan and BN promised deputy prime ministers for Sabah and Sarawak. But BN has not done any thinking before that, except to say that the two Borneo regions would be giants in economic and security terms, whatever it means. BN had half a century to develop Sabah dan Sarawak but nothing much had been done.

Whereas Pakatan Harapan is clear on both expanding the roles and responsibilities of the Sarawak and Sabah governments, as well as sharing income taxes collected in the regions with the state governments.

Pakatan Harapan promised to restore the 40% taxes collected from Sabah to the Sabah govenrment as per the proviso in the Federal Constitution, as well as committing to examine how to do something similar for the Sarawak government.

The sharing of income taxes is a progressive move to ensure that the sub-national governments have more resources to serve the people. It is a win-win arrangement as the federal government will also gain lots of tax revenue if the economy grows and more people pay for their profits and incomes.

In conclusion, I urge the voters of Sarawak to choose Pakatan Harapan, and in Sibu and Sarikei to vote for Alice Lau 刘强燕 (Lanang), Oscar Ling 林财耀 (Sibu) and Roderick Wong Siew Lead 黄秀励 (Sarikei) on 19 November.

They will ensure that the unreformed and unrepented Zahid-led UMNO-BN would not return as government. This is the only way that Sarawak’s rights can be protected, and that more resources and powers would be channeled to the Sarawak government.